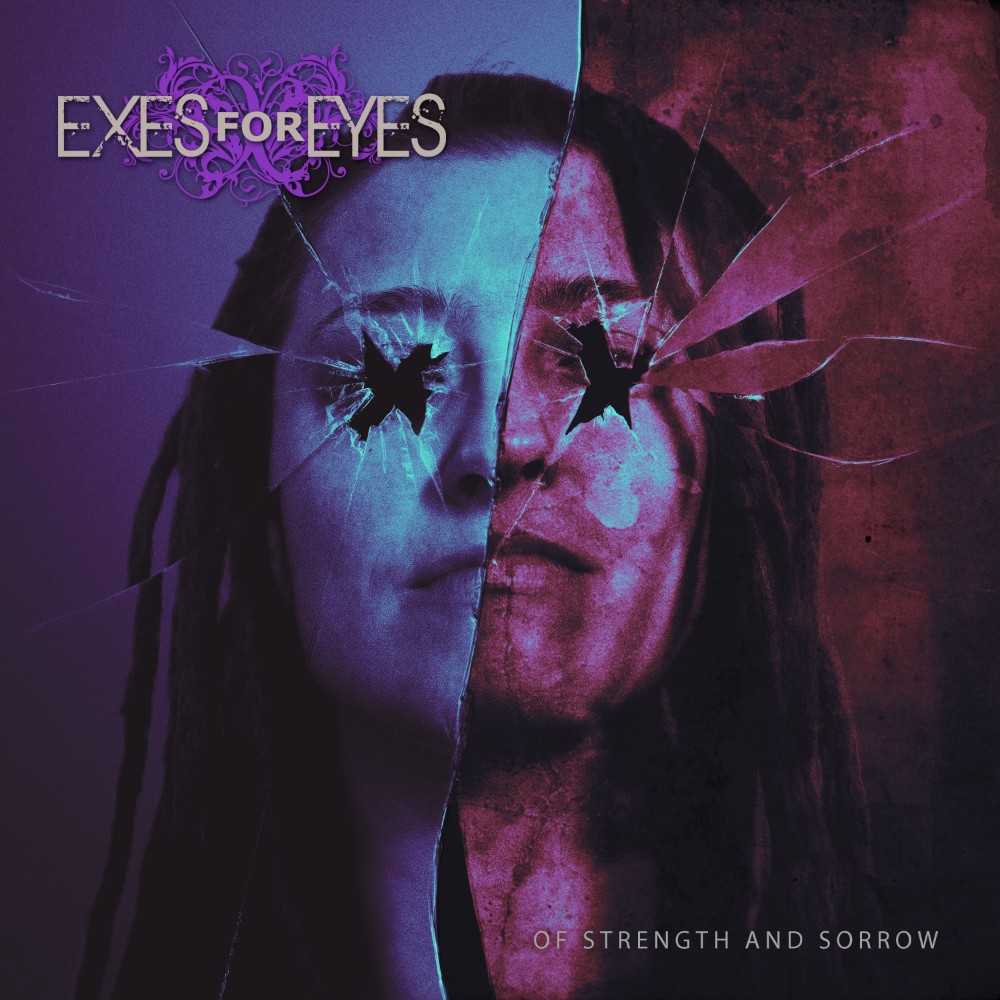 EXES FOR EYES – Of Strength and Sorrow

For their 3rd installment the Canadian groove metal assembly choose to further follow in the footsteps of Pissing Razors, Pantera or Machine Head while nodding in agreement to early Deftones and latter Soilwork as well Angelo Badalamenti’s "Twin Peaks" for a well-rounded and compelling release.

The Toronto, Ontario project was born a quintet as Big James Arsenian ( lead vocals), ex-Annihilator bassist Dave Sheldon (guitars, vocals), Randy Doyle (guitars), Graham Porter (bass) and Aaron Spink (drums), in 2009, and debuted with "The Amsler Grid" (2011), a combo of Panter-ic groove a’la Pissing Razors and alternative scream/clean-sung hardcore a’la Vision Of Disorder’s "Imprint". Before the release of the next album, Randy Doyle found himself without a band, and bassist Graham Porter and drummer Aaron Spink left also, leaving Exes For Eyes (EFE) a duo. Nevertheless, Arsenian and Sheldon recorded "Tongues Like Figure Eights" (2014) with session musicians. The album was even better and more mature than the debut, heavily influenced by latter Soilwork (unsuprisingly Björn Ove Ingemar "Speed" Strid providing guest vocals on "Done For Good), as well as Biohazard and Prong, for a well-rounded work somewhere between Prong’s "Cleansing" and Soilwork’s "Natural Born Chaos". There was also some experimentation with technical dissonance a’la Meshuggah which signaled the band’s direction might shift away from the groove-dominated sound toward the more metalcore vein of Killswitch Engage or All That Remains.

The time ripe for writing album no. 3, Porter and Spink returned to the band and the quartet began creating what would become a 65 minute, 13 track record. With "Tongues Like Figure Eights" Exes For Eyes (which may or not have gotten the idea for band’s name from Machine Head’s seminal debut album "Burn My Eyes" cover) unleashed a #the platinum project campaign, aimed at selling digital copies of their sophomore effort for just $1 with hopes to sell a million copies but managed to reach 16,000. With the new album, "Of Strength And Sorrow", they continue the campaign with some twists and turns (follow the link under the review for further details).

"Of Strenth And Sorrow" surprises with previously only hinted at solutions for melody and atmospherics, the acclaimed groovecore sound woven through with movie score-like synths and keyboard melody recalling such works as Angelo Badalamenti’s "Twin Peaks". The heavy and thrashy songs are full on aggressive while the downright neoclassical pieces are more moody and longer, with some compositions recalling nu metal ballads of Deftones’ "Adrenaline" (The Fire Inside My Head) or Slipknot’s "Volume 3: Subliminal Verses" (Set It All On Fire) which are both compliments in my book, while also reminiscent of fellow countrymen Planet Eater. The most interesting is the two-part "Hold On", as if EFE’s positive and uplifting answer to Pantera’s negative and depressing "Suicide Note Pt. I and II" with "Part I: You Are Not Alone" more of a ballad and "Part II: Stronger Than This) a ferocious thrashfest. There’s still plenty of latter Soilwork inspired clean vocal melodies ( True Self Reckoning) and melodeath riffing (Love), as well as emotional ballad-ic stylings which rival Suicidal Tendencies’ "Love Vs. Loneliness", and the closer (Methuselah) is a little bit of everything the album has to offer most notably recalling Prong’s "No Question". Clearly a lot of talent, work and plenty of thought was put into this excellent album whereby any metal fan will find something to appreciate therein. Another homerun for Jon Asher and Asher Media Relations!

I have to say, though, the first 3 tracks did not quite make a huge fan out of me. They are pure groovecore somewhere between Pissing Razors’ "Casting Down The Plague" and Lamb Of God’s "Sacrament" (both excellent albums in their own right) with "Memories That Last" structurally (rapid verse 1, rapid chorus, rapid verse 2, elaborate solo faded out, end) very similar to Pantera’s "The Great Southern Trendkill", but all 3 tracks generally in the same vein. They do seem to be in an intelligently designed succession whereby each track gradually ramps up the intensity and variety as the album reveals itself to you and by the time the 4th track, "Nothing Ever Satisfies" changes into the more sinister and atmospheric melodicism you find yourself drowning in it, very similarly to the way an unknown internaut once described falling in love as if being slowly drenched in a steady drip of rain until you’re completely soaked. However, they are still on the safe and predictible side. Also, as lyrically compelling as this album is, there are moments of excessive profanity (True Self Reckoning) I found very off-putting. For the above reasons the score is what it is.

Exes For Eyes emerged as a unique construct from the start and continued to both surprise and meet expectations. On "Of Strength And Sorrow" they take their craft to new, unprecedented levels, with excellent feel for melody, pace and that something that makes you want to spin the record over and over for increasing enjoyment. With no duds in their discography the Canadians deserve your time and money and they had better get both from you soon.

BROTTHOGG – Echoes of the Past