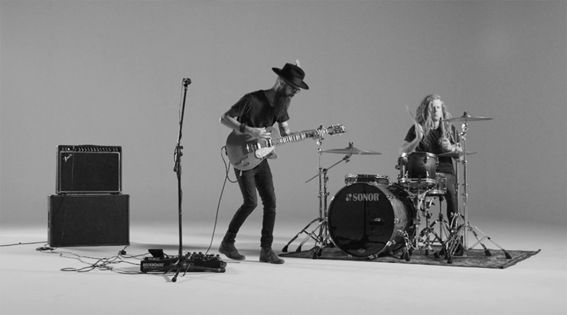 South African blues-rock duo The Amblers have released the video for Ratty Old Mo’, the title track from their latest EP. The band aren’t keen on delving too deep into the meaning behind their tracks as vocalist and guitarist Justin Swart explains, “It’s so important to us that people connect our songs to their own stories, in their own way.” He does add, “Ratty Old Mo’ in essence is the story of a boy, who went through some stuff as a kid and as a man is realizing that relationships are hard work.”

Shot, directed and edited by Chase Beynon from Capital Collective, it was decided the minimalistic but visually captivating style of the video suited the band perfectly.

“Simplicity has been and is, synonymous with The Amblers. We approached the video for Ratty Old Mo’ in just the same way. Simplicity is tough to accomplish and requires a great amount of skill to pull off. There isn’t much, if anything to hide behind. With Chase we managed to translate that simplicity visually and we are excited to share it with people.” Comments Justin.

The Amblers are a folksy, blues rock duo hailing from the vibrant and diverse music industry in South Africa. The two have a broad range of both local and international musical influences from Southern Gypsy Queen and The Black Cat Bones, to The Rolling Stones and Jack White. Their approach to music is raw but not unpolished, lending an authentic energy to huge drums and dirty, vintage guitar tones.

Acclaimed drummer Jason Hinch provides an accomplished and powerful framework for Justin Swart to deliver his raconteurish ideas of music and lyrics to a listener. The duo has released two EP’s to date, The Dustling Man and Ratty Old Mo’.

“The Amblers have put together an incredible EP. It speaks of talent, musical ease and damn good melodies.” TEO MAGAZINE. (AUS)

“Nowadays it’s become somewhat of a treasure hunt when it comes to finding such originality and passion, let alone consistency. It’s exactly what it comes down to in fact, and whatever you find around these routes are that of treasury as much as The Amblers are.” BLOEMFUNTOWN. (SA)

“A blues rock EP that deserves your full attention.” TEXX AND THE CITY (SA)

“The talent of two of SA’s finest musicians in Justin Swart (vocals, guitar) and Jason Hinch (drums) are brought to the fore in this short body of work that keeps you begging for more. Passion, power and personality reflect in the lyrics and musicianship and this is one of the freshest releases this year. Their combination of folk and blues go together like a fine whisky on a hot summer’s day.” POTCEFSTROOM HERALD (SA)

“Carrying a sound that leans towards the heavier side of things, fans of gritty, distorted bluesy rock a la Jack White or The Raconteurs are def. going to lap up these Johannesburg natives’ tunes. With a raw yet polished approached, the guys’ sound is simultaneously vintage and modern, and meriting further exploration.” PUREGRAINAUDIO. (CAN)

Listen to The Amblers on all digital platforms including

Ratty Old Mo’ is available now on all digital platforms including