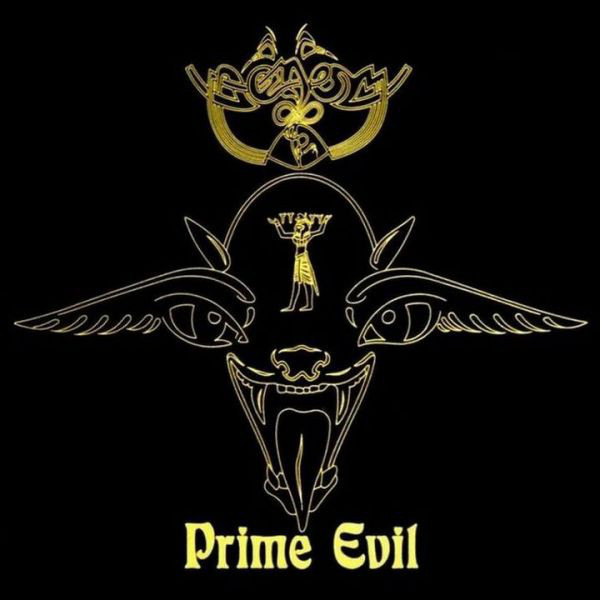 Thirty years ago, the pioneers of black metal and everything that is musically unholy spawned a rather overlooked record entitled "Prime Evil", which is quite the gem. I am of course referring to the mighty Venom from the cursed city of Newcastle who burst into the scene back in the late 70s and unleashed their first and most vicious album named "Welcome to Hell" in 1981. Even though these ugly fuckers were a part of the growing NWOBHM scene in the UK, they were something else entirely and people had never encountered anything as vile or satanic as this trio back in those days…and most were undoubtedly hoping that they would never come across anything as dangerous or sinister as these guys ever again! As stated in "Lords of Chaos" by authors Michael Moynihan and Didrik Søderlind, "Venom began in 1979-1980 in Newcastle, England, the result of three Metal fans and musicians deciding to take things one step further than their contemporaries" (10).

The classic line-up consisting of Abaddon (drums), Cronos (bass and vocals), and Mantas (guitars) released four studio albums together before things eventually fell apart, the first three of which are milestones and more or less laid the groundwork for black metal, death metal, and thrash metal. As Dayal Patterson points out, "[…] Venom were not only pivotal in the creation and development of "extreme metal," they were also arguably the first band for whom such a description could be considered accurate" (6). Patterson later on states that "[…] there’s no doubt that it was their early career that really helped create the black metal movement. And of course, Venom will always be the band responsible for the term itself (alongside several others), even if the later bands that appropriated the phrase would interpret it somewhat differently" (16).

Following the sonically lethal must-haves that are "Welcome to Hell" (1981), "Black Metal" (1982), and "At War With Satan" (1984), the somewhat lackluster "Possessed" came out in 1985 and simply lacked the spark and fire of earlier creations. By 1985, a slew of metal bands such as Celtic Frost, Exodus, Possessed, Kreator, Megadeth, Metallica, Slayer, and Sodom (just to list a few examples) were spearheading the extreme metal movement and had released some earth-shattering albums that made the aforementioned "Possessed" seem a bit tame by comparison. Mantas then left the band, but Venom soldiered on and 1987 saw the release of "Calm Before the Storm", which was even more of a letdown than "Possessed" in that the diabolical themes had all been ditched in favor of more fantasy-inspired lyrics. Not surprisingly, the album sank without a trace and Cronos eventually jumped ship and launched a solo outfit. Abaddon and the re-instated Mantas then recruited Tony ‘Demolition Man’ Dolan (ex-Atomkraft) on vocals and bass. As Alex Ogg concisely points out in the liner notes to the Venom compilation CD entitled "The Court of Death",

The group’s first major tour followed in 1984 with Metallica as support. However, the underground thrash and black metal scene had by now caught up with Venom. Bands such as Slayer, Bathory and Kreator had all moved in on their territory. As ever, the pioneers get the arrows, the settlers get the land. From the mid-80s onwards Venom’s dark star began to fade. Possessed, released in 1985, attracted only mediocre reviews. Trouble brewed in the ranks. The new black metal elite accused the band of not taking their devil worshipping seriously. While recording a new album, guitarist Mantas threw in the towel for a solo career. The remaining duo recruited locals Mike Hickey and Jim Claire for 1987’s Calm Before the Storm, before Cronos too departed for solo pastures. Abbadon, persistency embodied, recruited a new vocalist, Tony ‘Demolition Man’ Dolan, formerly of Atomlraft, for 1989’s Prime Evil, considered by some to be a return to form.

"Prime Evil" is neither groundbreaking nor a huge departure from what one would expect Venom to sound like in 1989, but it is a thrilling and ridiculously catchy slab of British black/thrash metal that hardly ever loses its momentum, and there are no weak tracks to be found on it as such. Even the sinister cover rendition of Black Sabbath’s "Megalomania" works like a wicked charm. If you can look past the fact that Cronos is not there, you will hopefully discover that this is a killer record with some seriously well-crafted and memorable tunes on it. The production courtesy of Nick Tauber (who had previously worked with Irish legends Thin Lizzy among others) might come across as slightly dated by today’s standards, but nevertheless, it packs a punch and retains the fiery and aggressive vibe of the song material. That Dolan is also a more technically proficient bass player than Cronos is pretty obvious when listening to such blistering tracks as "Into the Fire" and the title track, so there is a noticeable difference there compared to earlier outputs. Even though Venom were never about musical abilities, I do think it is commendable that Abaddon and Mantas did not merely hire someone who looked or sounded exactly like Cronos with respect to both the vocals and the bass playing. Dolan brought his own musical identity and charisma to Venom, which was a huge plus.

Mantas and Dolan (and initially Abaddon before he left the ensemble in 2018) have been touring under the Venom Inc. moniker these past few years and even released an album containing brand new material titled "Ave", but fortunately, they often perform a number of cuts from "Prime Evil" when gigging such as "Parasite", "Carnivorous", and "Blackened Are the Priests". In other words, there are still plenty of opportunities to see and witness some of those black/thrash metal treasures live on stage should you so desire, but it is nevertheless a damn shame that "Prime Evil" has never quite received the recognition and praise that it deserves. Again, it is neither a masterpiece nor as essential as the first three full-length discs by the band, but it is an exceptionally cool and remarkable album that still reeks of confidence and determination all these years later. Sadly, some critics have no time for the Dolan-era and consider it a mere footnote in the Venom chronicle. In the latest issue of the otherwise brilliant Classic Rock magazine, Paul Elliott mentions that "In Lant’s absence, Dunn and Bray had re-launched Venom with Tony Dolan, but after unremarkable four albums, the band broke up again in 1992". Things had obviously changed for Venom since the early 80s, but the three (not four) thunderous full-length albums with Dolan at the vocal helm are anything but unremarkable in the humble opinion of yours truly. According to an interview with In the Loop Magazine, Mantas rates "Prime Evil" rather highly:

Personally, I think we lost our way a little bit when it came to At War With Satan (1983) and Possessed (1985). I think they’re good albums, but I don’t think they’re great albums. They have good moments on them. But for me, in terms of my favorite Venom albums, in order and in terms of playing, songwriting, production, the general progression of a band, I’d say Welcome to Hell, Black Metal, Prime Evil, and Resurrection. I think Prime Evil should have been the third album.

Of the three records that he recorded with the band, the vocalist also considers it his favorite according to a 2013 interview with Metal Temple:

I like Prime Evil but a couple of tracks I don’t…but like the production by Nick Tauber, I think we got as close to Nailing it as possible then Temples? Love the idea, cover is shit, and production bad. Some good material wasted, I thought. The Waste Lands. Same again, better production than Temples but didn’t match Prime Evil and by that point we were closing shop so some good material again lost, no promotion and lackluster reviews but to be fair, we felt kind of uninspired also all for different reasons and I think were just going though the motions. Lack of true heart on that album. So I guess of those three, the one that had true intent and meant something real was Prime Evil so, that’s my fav.

Dolan and Mantas even recorded an entire album named "Crucified" with the M-pire of Evil band consisting of re-recorded tunes from "Prime Evil", "Temples of Ice", and "The Waste Lands", which was released by Scarlet Records in 2013.

On a personal level, "Prime Evil" holds a rather special place in my heart in the sense that the very first Venom album I ever listened to was the aforementioned compilation entitled "The Court of Death", which was released by Receiver Records in 2000. It contains 18-tracks from the Dolan-era albums of which 3 are lifted from "Prime Evil", and so that was my first encounter with Venom. I was 16 years old and mightily impressed to say the least.

Strangely, a so-called live album called "Bitten" was released in 2002 and there is a sticker on it which says that it contains material recorded on the "Prime Evil" tour of 1990, but in the booklet it states the following: "Studio material recorded during rehearsals for the "Prime Evil" and "Temples of Ice" European tour at Germany’s Bonn Biscuithalle, November 1990". That sounds somewhat weird considering that "Temples of Ice” did not see the light of day until 1991, and just what the fuck does the record really contain? To be perfectly honest, it kind of sounds as if they have taken either a bunch of rehearsal renditions of songs or perhaps even some poorly recorded live cuts and added fake crowd noise to them. Either way, it hardly sounds natural or organic by any stretch of the imagination, but the whole thing does have a peculiar charm to it and is arguably one of the weirdest entries in the Venom discography. You can listen to it on YouTube should you so desire:

On a totally unrelated note, if you ever watch the rather entertaining "Master and Commander – The Far Side of the World" from 2003 starring Russell Crowe and Paul Bethany, keep and eye out for Tony Dolan as he plays a carpenter named Mr. Lamb in the movie. Pretty cool, right? He is clearly a man of many talents.

If you feel like marking the 30th anniversary of the record, you can listen to "Prime Evil" via YouTube here:

"Prime Evil" was recorded at Lynx Studios in Newcastle and mixed at Jacobs Studio in Surrey.

Released by the now-defunct Under One Flag in October 1989.

·         Interview with Mantas by Christopher David for In the Loop Magazine, published online in 2016:  http://beintheloopchicago.com/interview-mantas-of-venom/