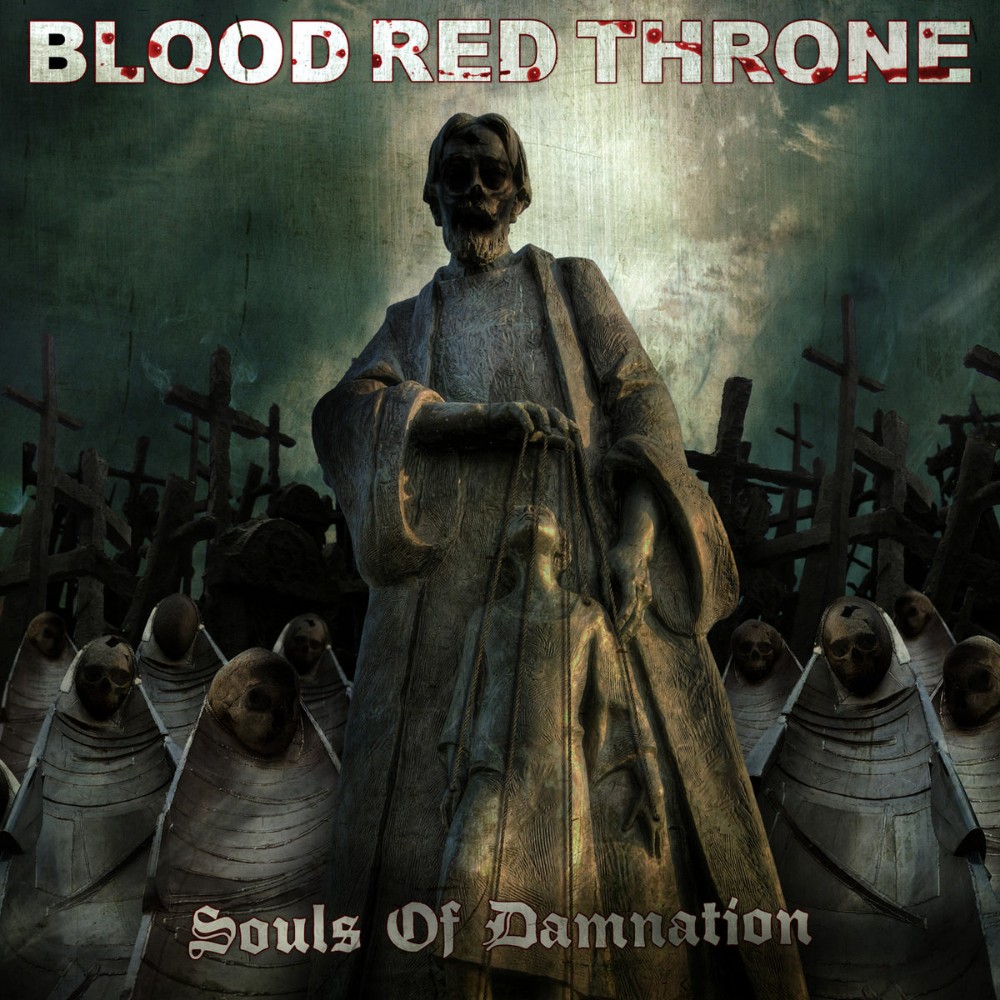 Another chapter in my pre-announced series of reviews of works which involved prolific guitarist Daniel "Død" Olaisen, the fourth album from his main squeeze, the death metal Blood Red Throne (BRT), marks a significant progress in the development of their sound.

What a difference can 2 years make! We need only mention Kreator with the jump from the heavy metal/goth rock of "Endorama" (1999) to pure thrash of "Violent Revolution" (2001), to the good, or Sepultura’s deathy thrash of "Arise" to hard core/groove metal of "Chaos A.D.", to the not so good, to validate that a relatively short time can bring significant improvement or decline in quality of musical output. Thankfully, "Souls Of Damnation" is an example of the former.

Recorded as Daniel "Død" Olaisen (guitars), Terje Vik "Tchort" Schei (guitars) (ex-Emperor), Osvald "Vald" Egeland (vocals), Erlend Caspersen (bass) and Anders Faret Haave (drums), with no line up changes from the predecessor, "Come Death", "Souls Of Damnation" maximizes all of the advantages of the former while minimalizing the flaws. The riffs and melodies are emphasized, bear smart repetition and memorability, need I just mention the favorite "Harme" with the characteristic Slayer-ish "Post-Mortem" riff or Sepultura-ic "Manifest" guitar "noise" background. It is, essentially, a death metal by the way of thrash album, BRT liberally drawing from both genres in a Deicide by way of Testament, or, to recall iconic death/thrash hybrids, Sepultura by way of the mighty Death, Død/Tchort solos recalling Chuck Schuldiner (Throne Of Damnation, Prove Yourself Dead), Vlad’s vocals Glenn Benton, and Caspersen/Haave section now Steve Di Giorgio/Dave Lombardo now Di Giorgio/Gene Hoglan. Olaisen & Co. really improved the songwriting with none of the tracks falling below 4.5/6 score level and 4/10 (if you include the bonus "Manifest Of Lies"), including the aforementioned "Harme" and "Prove Yourself Dead" (Not Turgenjev, But Close, Ten Steps Of Purgatory), are well above justifying the above total score.

"Souls Of Damnation" is one of BRT’s most well-written and executed albums but it contains one serious flaw that won’t let me raise the score above the above: emulation that is dangerously close to plagiarism, with the emulated nowhere given proper credit in the booklet. The fine line between emulation and plagiarism has been drawn both sides of the dynamic before (e.g. Metallica’s "Eye Of The Beholder" becomes Slayer’s "Skeletons Of Society", Metallica’s "Escape" – Pantera’s "Cemetery Gates" and Metallica’s "The God That Failed" – Megadeth’s "Countdown To Extinction"), but "Human Fraud" is almost note for note verse riff of Morbid Angel’s "Where The Slime Live"! I am not sure what they were going for here, emulation? parody? tribute? Yea, that last one sounds the most convincing as it almost sounds like they are covering Morbid Angel here.

Whatever their motivation for the "too close for comfort" emulation of Morbid Angel, there’s no denying the fact that "Souls Of Damnation" is one of Blood Red Throne’s finest hours, if not the finest. If you like your death metal brutal but catchy and you don’t mind some thrash in it, this album is a must.