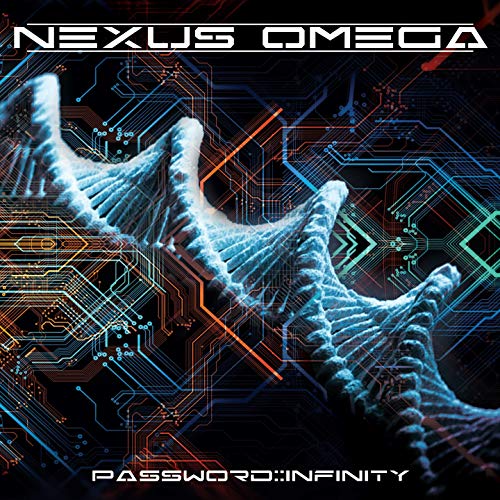 The roots of this German melodeath/metalcore troup go as far back as the year 1996 when melodeath outfit Phorkyas was conceived, released one EP and "Endzeit" LP (2005), and broke up in 2007 only to resurrect as X-terminate, also a melodeath project. X-terminate released one demo, "Termination::2107" (2010) and, would you believe it, split up in 2012. The vocalist Volker "Fram" Neubeck and guitarist Marcel Kellner-Hoefer joined Ayon where Toni Ehrlicher was a drummer. The second former X-terminate guitarist Sandro "Stahlhammer" Eippert joined in 2016, the four formed Nexus Omega and bassist Daniel Ohliger completed the lineup in 2017.

With Phorkyas music inaccessible, I thankfully was able to locate and check out XTerminate’s one track on youtube, the excellent "Chronology Of Termination", which reminded me of War Of Ages’ verses (metalcore) and Arch Enemy’s chorus (melodeath) both of which I like a lot. How does it compare to Nexus Omega?

Whereas Nexus Omega does resemble Xterminate to some extent, at least judging from the aforementioned sample, Xterminate seemed fairly equally melodeath and metalcore while Nexus Omega is slanted way toward metalcore. Metalcore’ing melodeath can work, when you consider albums such as Killswitch Engage’s seminal "Alive Or Just Breathing" or All That Remains’ "The Fall Of Ideals". When it works, we get good songs that brim with catchy melodies such as "Cyber Assassin" or "Bleeding Trough" (the latter actually sounds like Bleeding Trough, all the better for it) or the bona-fide melodeath "Nebula", which recalls Hypocrisy’s "The Final Chapter". When it works less, we’re hovering around the quality of In Flames’ "Reroute To Remain/Come Clarity", as in "The Grand Failure". When it works the least, we get riffs and melodies of the generic metalcore kind, somewhere between In Flames’ "Soundtrack To Your Escape" and Soilwork’s "Stabbing The Drama" (title track) with Heaven Shall Burn’s Marcus Bischoff’s vocals, not surprisingly, since they share similarity of musical patterns, such as the pointless "Nexus Omega" which should have just been the ending of "The Grand Failure", revealing too much of this album about the concept with detriment to songwriting.

The concept of "Password:Infinity", which I find to be overwhelming the quality, is based on George Orwell’s and David Icke’s (reptilian race) literary works, as well as motion pictures such as "Terminator", "Total Recall", "Bladerunner" or "Running Man". In metal, this concept is predominantly represented by Fear Factory and Scar Symmetry, but Nexus Omega has problems making it unique or even half as interesting. Seemingly styled after Scar Symmetry and Fear Factory, the music’s actually simpler than either one, as you derive moderate pleasure from listening to this album when you compare it to "Demanufacture", "Obsolete" or to "The Singularity – Phase 1: Neohumanity", which it resembles the most. In comparison, Nexus Omega’s debut just strikes me as an incredibly rushed effort, which brings me to the main gripe I have with this album: the production.

The production of "Password: Infinty" is so bassy and, shall we say, even deanceable, it overwhelms the guitars and the drums, with only the vocals the equal, which, as you know, is a mark of a techno or disco effort not heavy metal. Even Fear Factory in their least extreme era (Digimortal) still sounded like a heavy metal band. It almost sounds as though the, so called, programming were more important than guitars or that it were the basis and the guitars were additional ingredients. And do we really need an electronic sample on every single song?

"Password:Infinty" is an example of form overwhelming the content. Nexus Omega may be a new band and this may be their debut but the members have years of experience in previous bands and most of them worked together to boot, so no debutante’s slack in this case. In fact, songwriting deserving a 4.5/6, I actually deduced half a point for the awful production. Maybe give a call to Rhys Fulber or Per Nilsson and ask what a futurist distopian cybermetal should sound like, then kindly rip my head off with the sequel.