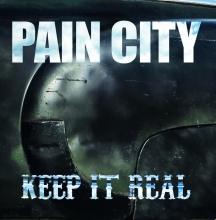 The Norwegian hard rockers known as Pain City have returned and this sophomore effort of theirs entitled "Keep It Real" is a raw and gritty affair. The cool thing about this talented trio is that they incorporate adrenaline-fueled riffs that sound as if they were spawned back in the glorious 80s and highly metal-influenced parts with a slightly more modern sheen to them into the mix, which works quite well here. Even a few punk rock references sneak into the picture now and then. While certain passages bring to mind Guns ‘N’ Roses, Motorhead, and Skid Row, others are reminiscent of Metallica and to a lesser extent Judas Priest, and these dudes manage to strike a good balance between catchy rock ‘n’ roll and pounding metal, which has resulted in an energetic record with some great hooks, memorable choruses, and wicked melodies to it.

There is nothing original to "Keep It Real" as such, but there is plenty of confidence, swagger, and attitude coursing through it and you can tell that Pain City are having a blast belting these tunes out. I also dig the slightly unpolished production in that it lends a warm and vibrant atmosphere to the album. The vocals are a bit hit-or-miss from time to time (as illustrated by the uneven "Jack of All Trades" and "Rock Them All"), but they get the job done and the musicianship is generally pretty damn solid (especially with respect to the creative drumming). Listening to inspired tracks such as the fiery album opener "Alive and Free", the groovy "Never Stop Fighting", and the hard-hitting yet dynamic "Swallowed by the Flames" is definitely a good time and most of the cuts defy you not to smile. If you are looking for a teaser, check the entertaining "Canonball on Fire" out.

"Keep It Real" has a charming underground feel to it that is both appealing and uplifting, and the entire thing truly sounds like a labor of love, which is pretty awesome. Support these guys and check this loud and nasty opus of theirs out!

LORDS OF THE CEMETERY – Path of Damara