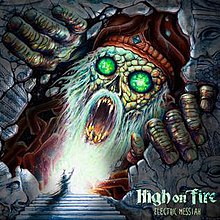 High On Fire (HOF), formed in 1999 by singer Matt Pike out of the ashes of Sleep, a stoner/doom outfit HOF was intitially just a better continuance of, got my attention with the excellent "Snakes For The Divine", their fifth full length, which I subsequently purchased. I also liked and reviewed equally great "De Vermis Misteriis" (5/6). I was particularly impressed with how the band basically wrote in the same style yet stayed relevant by adding twists and turns as well as borrowing from thrash and death to hone their unique brand sulphuric heavy metal. Probably the most akin to Mastodon, who liberally flirted with classic rock briefly arguably losing their own identity in the process, HOF kept it unwavering, getting meaner and heavier, instead, until Matt Pike quit drinking. "Luminiferous" (2015) introduced much more melody and harmony, with greater emphasis on hooks and songs, but, according to Pike "Electric Messiah" was supposed to beat even that.

Right from the first spin "Electric Messiah" appears to be HOF’s the most versatile, varied affair to date. The pacing is masterful, short, fast thrashfests sandwitched between slow long doomy elephantine crawls followed by old school death metal midpacers all with some notable progressive tendencies. The performances are impeccable, with Des Kensel’s thunderous percussive acrobatics, confident no matter the pace , Pike’s incredible riffs and solos the staple of every track, while Jeff Matz’s bass mostly following Kensel except when distinctly rich and powerful in "Pallid Mask", "God Of The Godless", "The Witch And The Christ", and especially, "Drowning Dog", which accounts for roughly half of the album. The production of Converge’s Kurt Ballou (Darkest Hour "Godless Prophets and The Migrant Flora") and the mastering of Alan Douches (Machine Head) yielded a massive, heavy result that allows the all-encompassing melody shine through each individual output.

The best tracks on the album are overwhelmingly in the first half. While the opener "Spewn From The Earth" is still very much old Mastodon/Bison B.C. sludge, already more intricate parts and melodic aspects begin to appear strongly reminiscent of Darkest Hour’s "Godless Prophets & The Migrant Flora", yet the following sludge masterpiece "Steps Of The Zigurat – The House Of Enlil" recalls Mastodon’s "March Of The Fire Ants" from the "Remission" album, with excellent dynamics and changes of pace and plenty of melody crowned with one of the sexiest heavy metal riffs ever written (6:51), lyrically a tale of dark creative powers of the Universe in battle, many Bible scholars believe occured between Genesis 1:1 and 1:2, the music almost cinematic to convey it. The title track is kept pretty much in the same convention as the opener yet surprisingly waxing Obituary-ish from "The End Complete" album, something they actually turn into a full on Obituary worship on the following excellent "Sanctioned Annihilation", atmospheric slow Slayer-ic intro giving rise to the longest track of HOF’s career (10:29). We’re temporarily an old school death metal band, says "The Pallid Mask" with an excellent Megadeth-ian "Peace Sells But Who’s Buying" solo, except when we’re thrashy hardcore punk, say both the midpaced Biohazard-ian "God Of The Godless" and the fast "Freebooter" with a memorable melodic Prong transition, both tracks highly reminiscent of the "Luminiferous" material. The finest and the most viciously unrelenting track has got to be "The Witch And The Christ", too, a thrashy hard core punk number with a very hardcore-ish excellent moshy Anthrax "Killing Box"/Prong "Cleansing" riffing that goes on and on, lyrically I decipher to be about how the demons often come disguised as angels of light and you can’t tell as you become numb to both light and darkness, a very relatable subject matter to me as of late. The biggest surprise is the infectiously melodic closer, "Drowning Dog", a very rock & roll tune turned almost melodic death/doom, so different from the other eight it sounds like a cover, the track is very catchy and you will hum it all day.

Is this the best High On Fire’s work? It’s definitely up there and I love how they married the aggression of ""De Vermis Misteriis" with the melodic sensibilities of "Luminiferous". I found the title track, "God Of The Godless" and "Freebooter" underdeveloped and safe as compared to "House Of Enlil" or "The Witch And The Christ" but, overall, this is still a massively great album from a band that up to this point has resided somewhere in my peripheral vision. "Electric Messiah" moves them front and center and I hope it will do the same for you.