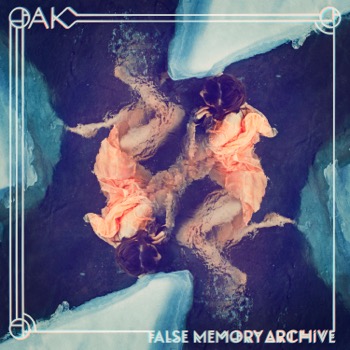 Norwegian experimental rockers Oak are not your everyday outfit. These talented dudes know exactly how to write tunes that are brimming with confidence and gloriously morose vibes. There are elements of prog rock, electronica, ambient, and minimalistic rock to Oak’s unique take on challenging 21st century music. Nothing is ever straightforward on this 9-track offering or predictable as such, which is to say that this is one of those cool discs that will grow on you the more that you spin it. It takes a while to digest and absorb its content simply because it is so rich in detail and layered, but the compositions do nevertheless have a way of creeping into one’s mind and soul almost immediately due to them being so moving and heartfelt. Strange dichotomies and contrasts collide and crash throughout yet the entire thing feels balanced and organic as if everything fits together perfectly. I know, it sounds weird, but there is something about this melancholic opus that just works on so many levels despite its many influences and blending of various styles and genres. There is a powerful sense of dynamics and groove to the proceedings, but there are countless rather quiet and introspective moments too. In many ways, the record strikes the perfect balance between being gentle and moving on the one hand and frantic and intense on the other. There is crunchy riffing to the long and sprawling "The Lights" while "We, The Drowned" sounds as if Depeche Mode and Pink Floyd wrote a song together in some awfully depressing and claustrophobic place. "Lost Causes" is not entirely unlike an Ulver track from the "Perdition City"-era. The vocals do not always hit the mark, which is my main gripe with the album, but that only happens occasionally. In the overall perspective, the musicianship is strong and solid.

Oak have spawned a truly remarkable record that encompasses countless different moods and emotions. When listening to "False Memory Archive" it is quite evident that these songs are from the heart and carry a lot of depth and substance, which is probably why the nods and parallels to acts such as Marillion, Steven Wilson, and Airbag are so prevalent in places, but do not get me wrong; Oak have a sound and an identity that they can rightfully call their own. Although the aura and atmosphere of the album may be on the somewhat bleak and tense side, it is an exhilarating and gripping one that you should check out once it hits the streets and digital retailers.