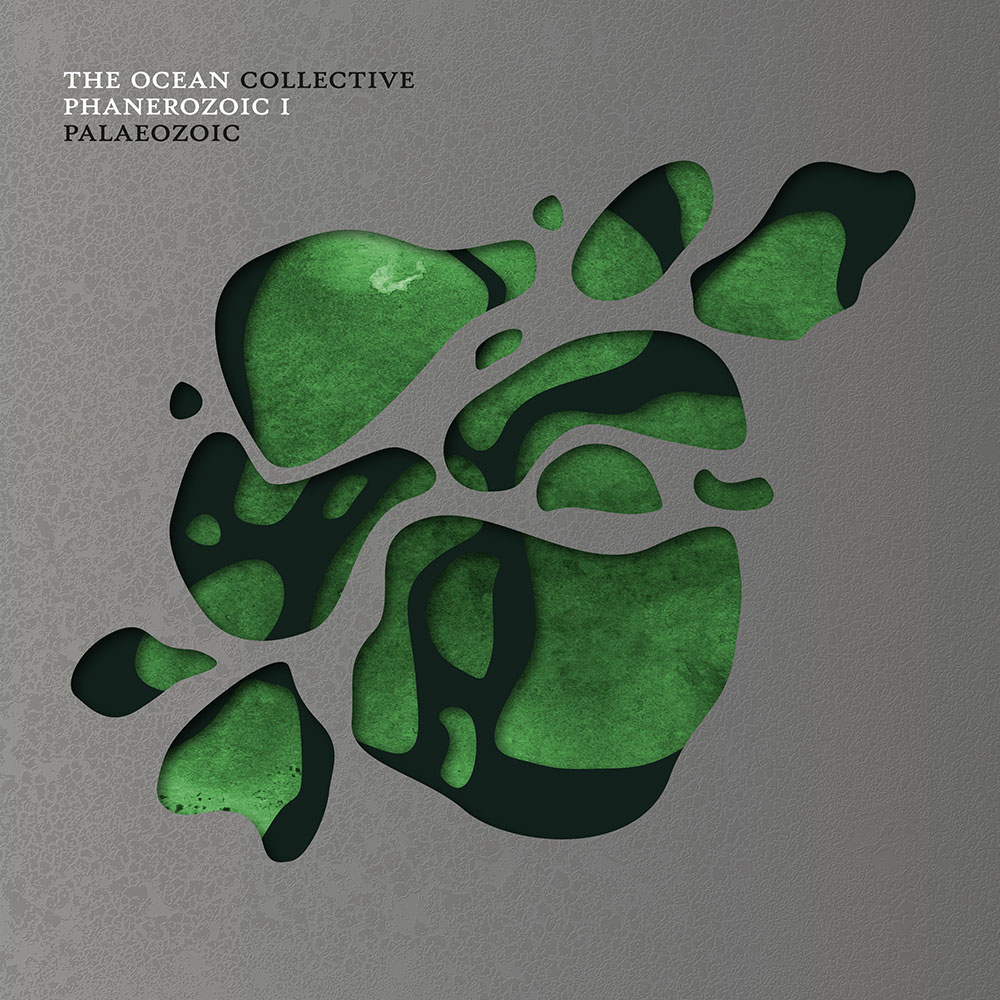 On the heels of their massive, sprawling ‘Permian,’ The Ocean Collective is unleashing another piece of their highly anticipated upcoming album: ‘Devonian: Nascent’.

Proving again why they are one of the most respected groups in the contemporary prog-metal world, ‘Devonian’ takes a completely different turn than their previous single, in part due to the vocals of Jonas Renkse, of Swedish metal giants Katatonia. The collaboration has long been in the making, explains Renkse: "Robin approached me for a guest spot already in 2005, and I really wanted to be part, but at that time we were in the studio ourselves recording ‘The Great Cold Distance’ so I felt I had too much on my mind. We have met after that and talked a little about doing something and now it finally happened. ‘Devonian: Nascent’ became a mammoth track without ever losing its initial melancholy."

Adds THE OCEAN mastermind, Robin Staps, "We sent Jonas the track, and what we got back as a "demo" was almost identical with what ended up as the final version on the record. Jonas has a perfect and intuitive understanding of our music, there was no need to explain anything. He came up with his own vocal parts and lyrics, and everything just fit perfectly from the start. Katatonia’s ‘The Great Cold Distance’ was an important album for me and for The Ocean, it was one of the first albums where heavy, low-tuned guitars and clean vocals next to one another were actually working out for me, personally. It was an album that made me reconsider my opinion about clean vocals in metal, and that forged my own desire to look for a vocalist for The Ocean who could also deliver cleans."

Ebbs and flows of proggy melodies, crushing guitars, swelling strings and powerful vocals match the heavy lyrical themes The Ocean Collective has made its signature. ‘Phanerozoic I’ is now available for pre-order, along with meticulously designed merch bundles, something for which they’ve become known, and will be released November 2nd via Metal Blade Records (CD / digital) and the band’s own Pelagic Records (vinyl). Pre-order now via Metal Blade Records: metalblade.com/theocean

More on The Ocean Collective:

Since 2001, the Berlin-based musician collective The Ocean Collective have released 7 critically acclaimed studio albums, and a split EP with Japanese post-rock legends Mono. With an ever-changing lineup of various on- and off-stage musicians and visual artists, the relentlessly touring group have become well known for their immense, mind-expanding live shows, which they have carried into the most remote corners of the globe, from Siberian squats to colonial theatres in Ecuador.

Over the course of their storied career, The Ocean Collective have toured with Opeth, Mastodon, Mono, The Dillinger Escape Plan, Anathema, Between The Buried And Me and Devin Townsend, and have appeared on major festivals including Roskilde, Dour, Pukkelpop, Roadburn, Wacken, With Full Force, Summer Slaughter, Summer Breeze and Graspop. The band’s own Pelagic Records has also become one of Europe’s leading labels for post-rock and post-metal, with a catalog of 120 releases since 2009.

After 5 years of touring on Pelagial, the band started recording their 8th studio album in February 2018, split into two volumes to be separately released in 2018 and 2020 respectively, titled Phanerozoic. The Phanerozoic eon succeeded the Precambrian supereon, spanning a 500 million-year period leading to the present day, and it has witnessed the evolution and diversification of plant and animal life on Earth, and the partial destruction of it during 5 mass extinction events. Conceptually and musically, The Ocean Collective’s Phanerozoic is the missing link between the albums Precambrian and Heliocentric / Anthropocentric.

Guitarist and primary songwriter Robin Staps penned Phanerozoic as he did its predecessors, in seclusion in a house by the ocean. The first volume of the double album Phanerozoic is made up of bleak and heavy songs, boiled down to the essential core of the musical ideas driving them. With analog synths merging with the heavy guitars, the addition of Peter Voigtmann to the band’s ranks has made a marked difference. After years of handling the spectacular lighting design at The Ocean Collective’s live shows, essentially "playing drums on the lighting console every night" as Staps puts it, he now brings a bevy of angry, dystopian sounds to the songs. Phanerozoic also marks the recording debut of bassist Mattias Hagerstrand and drummer Paul Seidel, who both bring their own style and approach to their respective instruments.

As with all of The Ocean Collective’s releases, the music is only one piece of the puzzle. The collective has always been known for lyrics that are poignant and thought-provoking, and Phanerozoic is no exception. The central idea upon which the lyrics are premised is that of ‘eternal recurrence’, "Nietzsche’s concept that everything happens over and over again, an infinite amount of times throughout infinite time and space", Staps explains. "When you look at Earth’s history you find a lot of evidence for this: continents have collided and drifted apart across the oceans and collided again, life nearly disappeared various times but then resurged again… this album is essentially about time, perception of time, and repetition. It is about coming to terms with the fact that there are things in life which will recur and which we cannot change and finding ways of dealing with that".

The immediacy of Phanerozoic can be attributed to the band working out every detail and testing every song live in the rehearsal room prior to heading into the studio, a different approach as compared to their previous releases. The process of laying down tracks began in Iceland, with the drums being tracked at Sigur Ros’ own Sundlaugin Studios with long-time friend and producer Julien Fehlmann. A big drum room with great natural reverb located in a bleak and beautiful place surrounded by nature provided the perfect location for the initiation of this record.

The remainder of the album was tracked in Berlin. A brass section was recorded, and previous collaborators Vincent Membrez (piano) and longtime live cellist Dalai Theofilopoulou are featured. Katatonia vocalist Jonas Renkse delivers a stunning performance on the 11 minute track "Devonian". However, this is very much vocalist Loic Rossetti’s album. Staps and Rossetti worked extensively, trying out a variety of styles and focusing on finding the best possible approach for each song. "Loic screaming over a heavy part always works great, but our goal was to avoid always going the obvious route this time", Staps explains. The result is an album which gains its heaviness not from the surface but from below, not so much from the vocals, but from the underlying riffage, bass and drumming.

It was a conscious decision not to let this fondness of experimenting stretch to the choice of the team working on the album: Julien Fehlmann tracked drums, Jens Bogren (Katatonia, Opeth) handled mixing and mastering duties, and Norwegian artist Martin Kvamme, whose only clients are Mike Patton and The Ocean Collective, was once more in charge of the mind-blowing artwork, making this his 5th consecutive collaboration with the collective. "There’s no reason to change a perfectly working formula", Staps comments. "When Jens played us the basic sound of the record, Loic and I looked at each other and our jaws dropped. It sounded SO FUCKING HEAVY that for a moment we were thinking about what we could potentially do to make it sound a bit more human and a bit less perfect… but we eventually learned to accept that Jens had simply done an outstanding job".

Each of The Ocean Collective’s releases has proven a profoundly immersive experience, with an unrivalled attention to detail – something which becomes particularly apparent in the award-winning packaging: for the lavish acrylic boxset that came with 2013’s Pelagial, over 10.000 acrylic layers were individually silk-screen printed and manually assembled. That which accompanied 2010’s double album Heliocentric / Anthropocentric was particularly unique, its gatefold sleeve featuring rotating gold-foiled PVC dials screwed on top of it. Phanerozoic will not fall short of its predecessors: Phanerozoic will come in a trifold (LP) / digipak (CD) with die cuts through multiple layers, creating a 3D effect; topped off by metallic inks and a blind embossing emulating a rock structure.