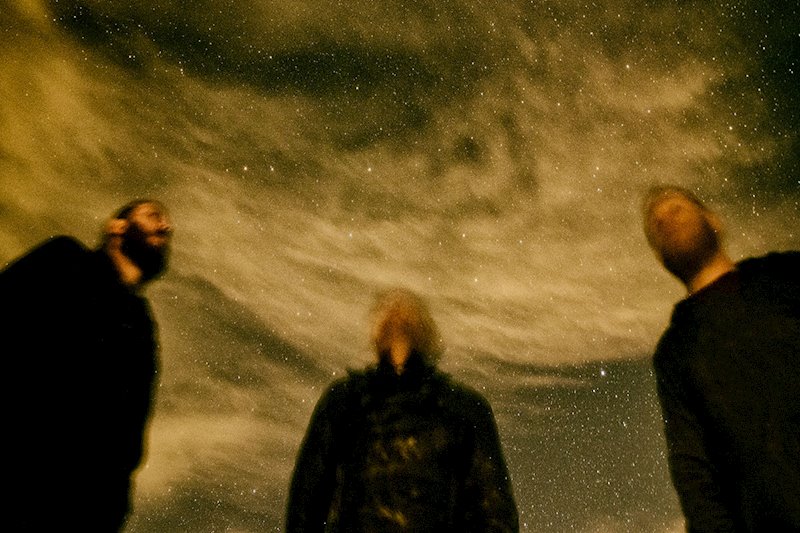 "It’s been a long journey from the last album to here, for those that have been waiting for it we commend your patience and thank you for your support. We’re thrilled to finally be able to share the album in it’s entirety, which is altogether elevated experience to hearing the individual songs (or so we think)."

"a well-balanced, black-tidal-wave of rock and psychedelics" – POPMATTERS

"With one foot in the garage and the other in the cosmos, this five piece metal band from LA
delivers…Seriously powerful stuff" – GIANT ROBOT

Los Angeles’ ANCESTORS create mighty, modern music that dovetails slow, heavy riffs and atmospheric, melodic instrumental passages, exuding a deep sense of melancholy. Six years have passed since the band’s previous album, In Dreams and Time, which came at a transitional and difficult time in each of the band members’ lives. In those six years, the band has slimmed down from a 5-piece to a 3-piece, also adding drummer (Daniel Pouliot of HORSE THE BAND and ex- SILVER SNAKES) to their ranks. This lineup has onsciously taken their time in writing their 5th album. It was surely worth the wait: „Suspended in Reflections“ is a culmination of everything the band have accomplished thus far. It feels like ANCESTORS have finally arrived at their own,right place.

„I think that as songwriters we’ve grown exponentially over the past six years“, comments guitarist and vocalist Justin Maranga... „but the most important change was the removal of ego from the writing and recording process. We tried to step out from behind our respective instruments to write the best album we could. We made a beautiful record as a team.“
ANCESTORS’ soundscapes are slow and vast, melancholic, dreamy and heavy, all at the same time: fertile soil for venturing outside of the typical realms of rock and metal instrumentation. The jazzy bass lines in „Release“ and the proggy strings in „Into The Fall“ prove that the 3-piece is not confined to any specifc genre of music. The use of an Aeolian-Skinner church organ, however – an instrument with close to 1.941 pipes – woven throughout the album, is the proof that these excursions are not blind experiments, but landmarks of a sonic path that this band has carefully chosen. In their 11 years as a band, ANCESTORS has toured multiple times and played festivals in Europe, the US and Canada. The band will return to Europe in the fall of 2018.
Style: Prog/Post Rock