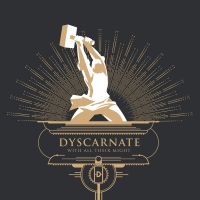 These Britons waste no time for pretty melodies but pummel you over the head relentlessly with the double Vulgar Display of Power, Demanufacture and Misery Signals altogether, seamlessly melding groove, death and hardcore in an explosive cocoction as you run from invisible demons like the Biblical Sceva’s sons, leaving you naked and severely beaten. Look at that cover, at that dude with a hammer bigger than him. He ain’t playing around and neither is Dyscarnate.

The Pantera and Fear Factory references are best to describe the way the trio (Tom Whitty – guitars, vocals, Al Llevellyn – bass, vocals, and Matt Unsworth – drums) fuse one guitar, bass and drums into a cold, premeditated machine of death and destruction with a plethora of creative catchy riffs and structures of the kind you find on the seventh or eight Pantera, second Fear Factory or any of the Misery Signals (the best metalcore band ever?)
The most Panteric of all are the excellent "Backbreaker" and "All The Devils Are Here", though, admittedly, neither Tom or Al sound like Phil Anselmo, one death growling and the other with more of a harcorish scream (and I have no idea which does which). Also, the album is very heavy. Oh, they offer a bit of relief for some doomy ballad-like moments but that’s just so they can squash you like a bug with sudden fury and tonnage you thought you were ready for from just looking at the cover. Even when they slow down significantly for the creepy "Traitors in the Palace", the idea is still to feed you your own still beating heart, just slowly, similarly to the closer "Nothing Seems Right".

Seemingly to Pantera and Fear Factory with which they have the most in common, they vary the pace and moods while seldom relenting the fury, such as when they begin by a 1, 2, left, right punch "Of Mice And Mountains" (recalling Pissing Razors’ "Cast the Plague") and "This Is Fire!", whereby you marvel at how death metal can fit so well with groove, but already "Iron Sharpens Iron", besides being true to the title, offers hints of melody (more Immolatory than Maidenesque kind) and variety, a very torturous and uncompromising number nevertheless, the fury and the songwriting recalling some of the aspects of "Burn My Eyes" ("All the Devils Are Here" , especially at the end) Perhaps this incredible power is emphasized by two aspects, not a single solo, and considerably short length of the album, just over 39 minutes. Admittedly, if it were longer, it might get tiring after a while, because, and I can’t stress that enough, the album is very heavy. Dyscarnate has a tiny bit to do with deathcore on "End All The Flesh Before Me" but it is merely to add additional punch to the package.

“With All Their Might” is all killer, no filler so do me, yourself and the band a favor and buy it today. You might want to empty your intestines and bladder, though, before you press "play", and don’t say I didn’t warn you, because, you guessed it, the album is very heavy indeed.

AVERSIO HUMANITATIS – Longing For The Untold