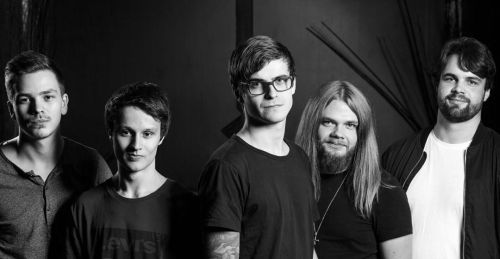 FIGHTING SHADOWS AND PITCH BLACK OMENS – AN INTERVIEW WITH FRETMIDEN

I recently came across the interesting and highly talented outfit that is Fretmiden, which is a young extreme metal quartet hailing from the rainy city of Bergen, Norway. These dudes recently unearthed and released a well-crafted and hard-hitting album entitled "Omen" that all you lovers of groovy and brutal music ought to check out. The amount of talent that is on display on "Omen" is simply undeniable and these guys know exactly what they are doing. Whether you are into Devildriver, Meshuggah, Shadows Fall, or perhaps Lamb of God is besides the point; Fretmiden’s take on deathcore will melt your ugly face off! Naturally, Eternal Terror Live had to have a chat with vocalist Isak Berg about the humble beginnings of the band, the new album, inspiration, and their future plans. So, buckle up and let us enter the realm of Fretmiden, shall we?

Greetings Isak, how are you? I figured that since some of our readers may not be familiar with the aggressive and vicious musical force that is Fretmiden, perhaps you could outline your band history for us and tell us a bit about your new album, "Omen"?

Isak: Hello, Jens! In September 2015, Tormod and I had managed to get a hold of William and Karim who we knew from the metal underground some years back. We had our first session together and everyone seemed eager to keep practising. We were still one guitarist down, but we kept meeting twice a week. Tormod got a hold of Even through a mutual friend. We knew nothing more than that he played a 7-string and that he had played some prog earlier on. He showed up at practice and proved to be really talented. A couple of months later we had already recorded a demo and had a set of 5-6 songs. We got our first gig in March 2016 and from then on we have played regularly at venues in Bergen, and have now played our first gig out of town. After having between 10 and 12 songs ready, we thought we could jump in the studio and start recording a full album. After some analyzing of our own music, we figured that the new songs had a "sound" the old ones lacked and that this was our sound. We then had to go back and pick the songs apart. This took some time, but we think it was worth it. "Omen" would not be close to what it is if we had not spent the time polishing our sound.

Where did you record the album? Did you mix it yourselves?

Isak: We recorded everything in our drummer’s bedroom. He has solid equipment and producing knowledge ,so we figured we might as well do it here rather than having another producer standing there with a stopwatch. This gave us the opportunity to make some changes and experiment while recording. The album was mixed by the extremely talented Tor Ninja. He has been very helpful in the process, giving us tips and critique to make the album even better. He really has an ear and a mind for this. He has produced several other artists and has his own music projects as well. Check him out!

The cover artwork looks stunning. I really dig that one. What does it connote or symbolize to you? Any hidden or deeper meaning?

Isak: The artwork is also by Tor Ninja. A lot of it came from a combo of his interpretation of our sound and our own thoughts on how this album cover should look. The album cover in itself pictures these huge "alien overlords" leaning over us, performing some kind of ritual. The aliens are a mix of something occult and technological and really reflect the lyrics and the feel of the title track of the album, "Omen".

Speaking of symbolism and hidden meanings, is the name of the band (Fretmiden) a word play on the Norwegian word for "the future"?

Isak: Hehe, yes it is. It is a misspelling of the Norwegian word for "the future", i.e. fremtiden. It started as a joke between me and some friends. One typed it wrong and it sounded funny, so we started saying "wow, fretmiden is here" whenever a new invention or discovery made its way to the media. When we in Fretmiden tried to figure out a good band name it just struck me that this might be it. You could also say the name is a small jest in the sense that most of the new djent and prog bands try to be super futuristic with album covers of distant planets and the vast space.

What was the initial motivation for launching Fretmiden? Have you been involved in any other bands previously?

Isak: Me and our guitarist, Tormod, had tried to breathe life into a withered band we played together in for a while, but we did not seem to manage to get the band back up on its feet. We sat down a couple of months after our last effort and talked for a while. We came to the conclusion that we both wanted, or rather needed, to make music. We wanted to do something else this time, so a new band would probably be better than trying to resurrect the old one. Tormod already had some songs ready, so we picked some riffs from them that sounded like what we wanted to sound like and that was it. We got a hold of William and Karim who played together in another band from Bergen named Gravfest. And like previously mentioned, Tormod got a hold of Even through a mutual friend. Before he moved to Bergen from Florø, Even played in a band called Acrasium and seemed eager to play music again.

Do you remember how, why, and when you became addicted to extreme music? Was it one or more specific releases that changed your perspective on music, or was it something else entirely?

Isak: Personally, I remember the day it happened for me. It was the title track of the magnificent album "Blackwater Park" by Opeth. My parents fed me hard rock and metal since before I grew teeth, but the day I heard "Blackwater Park" was the day I realized "Shit, music can be this heavy and still be groovy". I was listening to a digital radio one early autumn morning when I was around 12 years old. The song instantly hit something deep within. That discovery led down the more extreme path with bands such as Meshuggah and Thy Art is Murder. Thy Art is Murder released the "Infinite death" EP in 2008 and I have no idea how many times I have listened to it since then. That might have been the EP that got me into deathcore. The three bands I mentioned will always have a special place for me, especially the track "Blackwater Park".

In terms of writing and arranging songs for Fretmiden, who does what? Are you intuitive and spontaneous when it comes to composing songs and coming up with ideas and so on, or perhaps the other way around?

Isak: Tormod makes a lot of our riffs and spends a lot of his time composing full songs with the help of his guitar and computer. Some of the songs stay pretty much the same way he made them, but with some songs we just pick a riff we like and one that feels like Fretmiden and we build on it at practice. Other songs take birth just from jamming at practice. The process involves everyone and all our members get their touch on most of our songs before they feel complete. It is a nice process, really. If someone makes a shitty riff or a riff that does not feel like us, there are no hard feelings if someone else says "Ey, that riff sucks. Fuck that, we need something else entirely". I would say that we are pretty spontaneous when it comes to just making the riffs or a song. Then we spend weeks and months slowly making small changes and adding details. In the end the song can sound like something else than what it started out as.

Do you experiment and improvise a lot both when in the studio and/or when performing live? Perhaps you guys extend or expand on certain songs whenever you perform them live?

Isak: We do not improvise a lot live. We have small touches and details that are different live; small parts of songs that are different. Touches like these are needed to make an energetic show that blows peoples’ heads off. Most of the improvising happens in the studio and at band practice.

Do literature, movies, and/or other forms of art inspire you?

Isak: Speaking for myself at least, I would say it definitely does. I write all the lyrics and most of the lyrics start with just reading a sentence in a book or seeing another piece of art. From there my head starts spinning a completely new story. Other times we will make a riff and I instantly associate it with a sentence I read once and I have to write the lyrics there and then. This can be based on what matches the "mood" or sound of the riff and what the song should sound like and what story it should tell.

The distribution of music has changed drastically over the past 10-15 years and many bands and artists are no longer affiliated with any labels, managers, or anything like that. Nowadays, you can release your own material digitally in a matter of seconds, but it can be difficult to actually get people to notice your music because they are flooded with options and alternatives out there. What are some of your thoughts on this?

Isak: I think this is mostly positive. It gives new artists the opportunity to distribute their own music without having to be approved by an elite first. There are still labels, so if artists get their music out they can choose to continue on their own and not be bound by a contract. The problem is of course, as you mentioned, the issue with getting noticed. A lot of great bands drown in the sea of artists and it is easy to miss out. But I do think that it is a small price to pay for what the new ways to distribute music have to offer.

What are you guys currently up to in terms of band activities? Are you by any chance composing and writing new material these days or simply rehearsing for future live activities?

Isak: We are now back to practising and brushing off dust from many months spent in the studio. Right now we are focusing on new material. We already have half an album in material, but we are in no rush. I can also add that we are currently looking at different companies that press vinyl. "Omen" will be available in a physical form during the spring of 2018.

Any final insults or threats to the scummy readers of Eternal Terror Live?

Isak: Get your fucking headsets on and check us out. We will not leave the stage any time soon, so hop on the train and remember where you heard us first. Cheers and thanks for having me!

A CLOSER LOOK AT RAINBOW’S ‘STRAIGHT BETWEEN THE EYES’