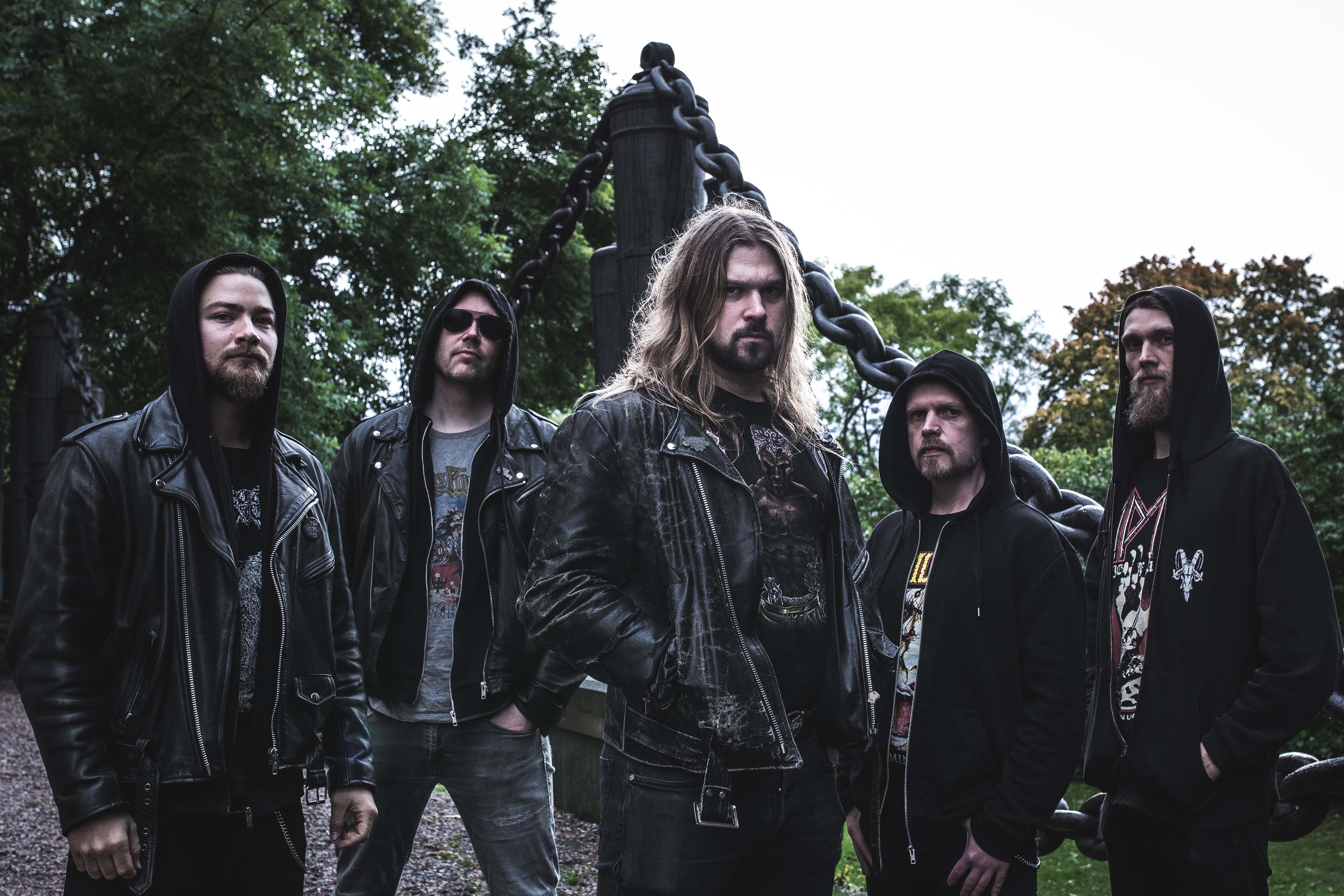 Proudly presents the premiere of

Initially we had decided not to reveal the horror movie sources behind the lyrics on our new album; to avoid any preconception for the listener, and because none of the lyrics are directly based on any movies but just inspired by movies – a big difference right there. BUT, for the sake of the approaching Halloween, let’s make an exception to our rule and expose the movie that inspired the lyrics of ‘Charnel Reflections’: it’s ‘Demons of the Mind’ from 1972. The lyrics are very much a flow of consciousness, quite surreal and metaphorical. The movie is just a starting point – an inspiration, so to speak. I guess the underlying lyrical theme is madness. I particularly like how the music glides from one mood to another with a smooth, determined flow to it – it’s calm and also savage – and I think, this reflects the lyrics rather nicely. This track is my new favourite in the Hooded Menace catalogue, which is rather cool thing considering that we’ve already reached our fifth album. Hooded Menace has always been all about memorable tunes, but I feel that we have fine-tuned our approach on ‘Charnel Reflections’ – as well as on our entire new album.

Doom has always been a style for a rather select but also very dedicated audience. Among the aficionados, HOODED MENACE have quickly become a household name for authenticity and excellence. With their upcoming fifth album, ‘Ossuarium Silhouettes Unhallowed’, the Finns continue to impress with immaculate songwriting skills and the perfect balance between harsh death metal fuelled outbursts and exquisite melodic melancholy.

HOODED MENACE were formed in Joensuu, Finland in 2007 by guitarist Lasse Pyykkö, who had also performed in the Finnish cult death metal band PHLEGETHON. The band has always avowed to the strong influence by early CANDLEMASS and CATHEDRAL as well as PARADISE LOST, AUTOPSY, ASPHYX, and WINTER. Their lyrics are often inspired by the classic 1970’s Spanish horror movie series ‘The Blind Dead’.

HOODED MENACE recorded a 2-track demo, ‘The Eyeless Horde’ in 2007, which was released on 7" the following year. Their debut album ‘Fulfill the Curse’ was released in 2008 and the highly acclaimed sophomore full-length ‘Never Cross the Dead’ came out in 2010. HOODED MENACE remained in a highly creative mode and delivered ‘Effigies of Evil’ in 2012 and their latest milestone, ‘Darkness Drips Forth’ in 2015. With a penchant for classic vinyl, the Finns also released several split singles and EPs for example with ASPHYX and COFFINS.

HOODED MENACE toured in Europe and North America, and performed at many major metal festivals such as Hellfest, Roadburn, Maryland Deathfest, Tuska, and Party San Open Air among others. Now the time has once again come, when HOODED MENACE unleash skeletal horror and sombre despair onto their craving audience. The dead shall ride on ‘Ossuarium Silhouettes Unhallowed’ and the living shall rejoice!