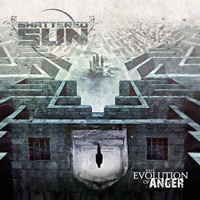 SHATTERED SUN – The Evolution of Anger

Texas metal band Shattered Sun vaulted into the landscape thanks to their debut album and subsequent high profile touring with Testament, Slayer, and the final incarnation of the Mayhem festival throughout North America. "The Evolution of Anger" as the follow-up display that experience and growth necessary to sustain interest. At their core, the quintet is a modern groove-oriented thrash act – taking inspiration from all angles to keep the adrenaline, aggression, and attitude on high, without losing grip of those melodic hooks and choruses necessary for dynamic separation track to track.

It’s as if the band takes the core elements that make Pantera and Lamb of God engaging, adds in a bit of that Testament-like chugging and throws down the southern stomp meets melodic death grooves that makes "Out for Justice" and first single "Keep Your Eyes Shut" instant headbanger winners. The lead break work melds together solid song-first mechanics against the sweeps, taps, and arpeggio wows that occur. Building in the occasional ‘breather’ moments before the next salvo launches, Shattered Sun channel the frustrations and observations of their world into a cathartic record that relates well to a tumultuous period of our history. The staccato-moments throughout "Like Gasoline" shift into atmospheric transitions, making the next return to heaviness explosive.

"The Evolution of Anger" does put in studio form what you’ll expect from Shattered Sun in their live comfort zone. Ten more songs that keep groove/thrash metal at the heart, using a modern approach that can be versatile, catchy, and very brutal. There’s little doubt that the fans they’ve already made will have no trouble enjoying this – and should continue to cultivate more into the tribe.

A FORMAL HORSE – Made in Chelsea