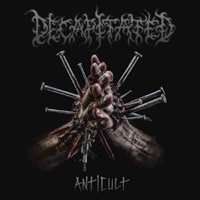 Veteran bands often stretch boundaries once establishing their foothold in heavy metal. Be it boredom, new members, or a genuine desire to achieve something different with each new release, that can make for polarizing debate amongst the faithful – who may abandon ship while newcomers hopefully fill that missing void. "Anticult" as the seventh studio platter for Polish act Decapitated will probably become one such record, as these eight songs lean more towards a streamlined groove/death metal attack and leaving much of the crazy riffing and blasting/drum progressive parts in the rearview mirror.

There’s plenty of catchiness to be had on the rolling riff train and slamming snare hits for "Deathvaluation", an early standout because of Rafal Piotrowski’s caustic bellowing vocally and the layered guitar action of Vogg. Meanwhile, the bass/drum mechanics from latest acquisition Hubert Wiecek and Mlody gives off plenty of Sepultura comparisons, drawing to these ears from the "Chaos A.D." era on much of the rhythmic propulsion for "Kill the Cult" – the low tuned, shape shifting instrumental transition sure to erupt volcanos or shake foundations. When the four-piece decide to go for blasting mania, they temper the proceedings with some atmospheric bliss midway through to make "Angel Line" that much more vigorous. But overall you can hear nods to groove metal and simpler, stunted word delivery that wouldn’t have been had during "Nihility" or "The Negation" for certain – which can make "Earth Scar" tougher to stomach, the mid-tempo riffs leaning more towards a modern, mall/metalcore audience.

When you boil the record down to its essence, "Anticult" still retains the heaviness and brutality we’ve come to know and love- you just won’t hear as many wild, progressive runs or technical drumming parts that leave jaws dropped to the floor. Decapitated feel the need to go where the ideas take them, and as such have still put out a quality death metal record that just contains more thrash and groove-oriented thoughts than ever before.