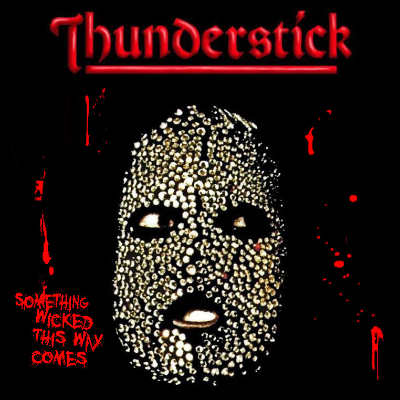 THUNDERSTICK – Something Wicked This Way Comes

The semi-legendary NWOBHM outfit that is Thunderstick has returned from beyond the grave, which ought to be a cause for celebration for a lot of you filthy heavy metal freaks out there. The fact that this 2017 effort is the first new material from the band in something along the lines of 33 years is a pretty huge deal in and of itself.

Named after and led by drummer Thunderstick (ex-Samson, ex-Iron Maiden), the 2017 line-up boasts three new members (Rex Thunderbolt on bass, Martin Shellard on guitars, and Lucie V on vocals) and the returning Dave Kilford who used to handle the guitars back in 1987-1988. There is an energy and passion on display on the album that is a joy to behold. Perhaps the addition of new members has provided the band with fresh ideas and input? Regardless, Thunderstick sounds re-vitalized and hell-bent on delivering kick-ass (and old-school) heavy metal of the highest order.

Not surprisingly, "Something Wicked This Way Comes" takes us right back to the dawn of the NWOBHM movement in the UK. The riffs, melodies, song arrangements, vocal melodies, and production values all reek of an age long gone by, namely the wild, inspiring, and musically exciting period of British heavy metal of the late 70s and early 80s. More importantly, the thick and pulsating atmosphere of this excellent album is so authentically vintage that it sounds almost surreal at times, so hats off to Thunderstick (the drummer) and his cohorts for managing to craft a wonderfully organic and raw record that perfectly captures the mood of the old days and yet sounds sharp, punchy, and current.

Album highlights include "Encumbrance", "Thunder Thunder", "Dark Night Black Night", "Don’t Touch I’ll Scream", "The Shining", and "Blackwing". They encompass everything that was and is great about pure no-frills metal. Great hooks, wicked riffs, memorable guitar solos, pounding bass lines, crashing drums, and heart-piercing vocals. The album closer entitled "I Close My Eyes" is a mighty fine and moving ballad. Certain parts and passages bring to mind the self-titled debut by Iron Maiden as well as the early Samson and Saxon records, but Thunderstick has a sound and an identity of its own. Not every cut is awesome, more specifically "Fly ‘n’ Mighty" and "Lights (Take Me Away)", but the rest are killer.

Do not make the mistake of thinking that "Something Wicked This Way Comes" is strictly for fans of NWOBHM or that it somehow sounds old and dated, because it does not. The majority of tunes possess a charming quality and a timeless vibe that are impossible to shake and there is something strangely refreshing about receiving an album from a band that clearly does not give a shit about what is popular or current or whatever. Thunderstick is all about good and accessible heavy metal music and there is absolutely no reason why you should not head on over to Bandcamp and check the album out.