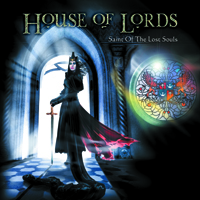 HOUSE OF LORDS – Saint of the Lost Souls

The renowned hard rock/melodic heavy metal act that is House of Lords recently released this 11-track album of theirs via Frontiers and the result is a satisfying one. Boasting strong melodic hooks and some really cool song arrangements, there is very little not to like about House of Lords’ 11th album. Guitarist Jimi Bell is the man of the hour and shines on such excellent compositions as the awesome opening cut "Harlequin", the ridiculously catchy "Concussion", the slightly melancholic "Art of Letting Go", and the uplifting closing track titled "The Other Option". The aforementioned tunes are most definitely the standout ones and benefit from huge choruses and addictive melodies. The title track is pretty damn wicked too and has an aggressive edge to it. Vocalist James Christian delivers on all fronts as well. The keyboards play a prominent part and yet they never take away the focus from the other instruments. Rather, everything seems to complement each other and work toward the same goal, which is to establish an atmosphere that is both thrilling and appealing. The album as a whole simply sounds more convincing than the last few records by the band. It is as if the band has recaptured an energy and intensity that was lacking for some time.

As cool as "Saint of the Lost Souls" is, it does contain a few tracks that pale in comparison to the others and leave a lot to be desired. I am referring to "Hit the Wall", "The Sun Will Never Set Again", and New Day Breakin’". They simply kill the momentum and fail to engage the listener on any emotional level whatsoever. Fortunately, the majority of songs are gripping and memorable, so despite a few fillers the album is undoubtedly worth your time if you find yourself in the mood for some well-written hard rock.