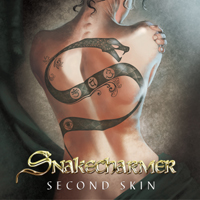 The kick-ass British outfit named Snakecharmer is finally back with a new sonic assault on our senses. It has been four years since the excellent debut album came out, but this 2017 follow-up of theirs has luckily been worth the wait. Come to think of it, this new effort is even better and more focused than the first album, which is saying something.

The line-up is pretty damn impressive and consists of Adam Wakeman (Ozzy Osbourne, Black Sabbath) on hammond and keyboards, Neil Murray (Whitesnake, Black Sabbath, Brian May) on bass, Laurie Wisefield (Wishbone Ash) on guitar and vocals, Simon McBride (Don Airey Band) on guitar and vocals, Harry James (Thunder) on drums, and Chris Ousey (Virginia Wolf, Heartland) on vocals. That pretty much says it all, I think. We are talking excellent musicianship here and music performed with class by seasoned veterans.

Musically, Snakecharmer is rooted in a mixture of blues, hard rock, and classic rock. Think early Whitesnake and you are not that far off. While the sound is delightfully thick, crunchy, and powerful, the songs are very well-written and cleverly arranged. There is a ton of brilliant melodies and catchy licks and so on to be found throughout the album. I also dig all the subtle nuances that sneak in here and there. Wakeman’s work on "Second Skin" is simply superb and adds a lot to the song material in terms of depth and substance. On top of that, the tunes are dynamic and move effortlessly between the mellow and the bombastic. Ousey’s vocal performance is great and my hero Neil Murray lays down a heavy and pulsating beat that locks in perfectly with Harry James’ punchy and passionate drumming. There is an underlying sense of melancholy to the songs due to the album’s bluesy vibe that makes for a very moving listening experience.

"Second Skin" is not only recommended to fans of early Whitesnake, M3, the Company of Snakes, and the likes, but to fans of quality music in general. The album has a lot to offer and each of the eleven tracks is memorable and interesting. This is simply an awesome record.