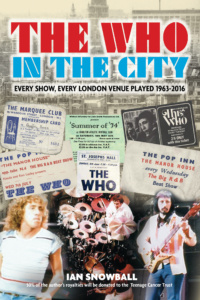 IAN SNOWBALL – The Who: In the City

This is the second The Who-related book by author Ian Snowball that I have been lucky enough to get my wrinkled hands on. The first one, which was a thorough and compelling tribute to The Who drummer Keith Moon, was a great read, and this new one by Snowball is no different.

As with the excellent Keith Moon tribute, you can tell that "The Who: In the City" is written by a dedicated fan with a lot of love for the band and subject matter. That Snowball harbors a lot of love for The Who is one of many reasons why I love this book. You can tell that he is truly passionate about the band and everything relating to it, which probably accounts for why the book feels so vibrant and energetic in places. The interesting thing about "The Who: In the City" is that its primary focus is on the relation between the band and the city of London, which basically means that Snowball has compiled and written an incredibly well-researched and well-documented book on how London influenced and continues to influence The Who and vice versa. In a way, one could say that London and The Who go way back and are firmly ingrained in each others history. The thing is that each member of the band was born and raised somewhere in London, and The Who (as well as the other incarnations of the band; The High Numbers and The Detours) has played an insane number of gigs in and around London throughout its fifty-year career. Heck, they are playing the Royal Albert Hall in March 2017; there is simply no stopping Townshend and Daltrey. Anyway, I digress. The point I wanted to make is that each London show from the band’s inception up until the present day is accounted for and noted. It is almost like reading a diary at times, albeit a diary written by someone outside of the band, but it totally works.

Like I said, the number of London gigs is staggering, and, obviously, there is a story to pretty much every one of those gigs. Snowball has managed to take a seemingly narrow topic and then weave and piece together an extremely interesting story that encompasses both passion and devotion, not just in the sense that The Who were dedicated and committed to their craft, but with respect to how devoted and passionate the fans and followers of the band and the whole Mod movement were. It is wonderful to read about that whole era where the music, the clothes, and the attitude all kind of went together. The members of The Who were an embodiment of that period, not just in terms of their music and lyrics, but also their appearance and charisma on stage. This book is filled with anecdotes and memories relating to many of the gigs, and they resonate with warmth, love, and nostalgia. Having different people lend a voice to the proceedings offers different perspectives to the events and happenings that are listed and described in the book. The thing is that Snowball’s narrative makes me want to travel to London immediately and explore all those places in that city where the band rehearsed, recorded, performed, drank, partied, and nursed their hangovers. Also, the inclusion of maps of London on which countless The Who-related sights and attractions can be located is a stroke of genius. On top of that, there is a chapter that includes instructions as to how one can undertake a The Who walking tour of London. You can actually take this book and use it as a guide the next time you visit the great city and feel like immersing yourself in the history of The Who. If that is not brilliant, then what is?

"The Who: In the City" is not just about the band and the different venues, bars, recording studios, restaurants, and shops in London that the boys frequented; it is also about the fans and how The Who’s music impacted them, the different historical landmarks of London, the atmosphere of the city, the mod environment, and why the band remains so iconic and sought-after all these years later. This book is indeed an amazing journey through the history of both The Who and the city of London, two larger-than-life entities that are inextricably linked. This little gem of a book will make you want to explore The Who and London in detail. I just wish that it was longer and that there were more pictures includes.

DISTANT SUN – Into the Nebula

KILLING FOR COMPANY – House of Hades