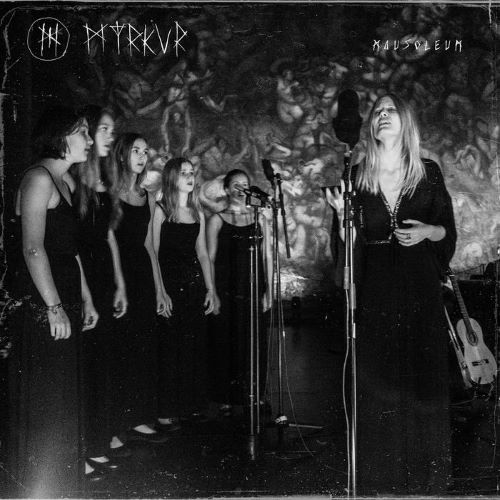 The Danish phenomenon that is Myrkur has been a rather controversial addition to the (black) metal scene with some being of the opinion that the band is insanely overrated and others believing that we are witnessing something monumental, almost as if Myrkur marks some kind of rebirth of the genre. Me, I have been somewhat indifferent to Myrkur until now. Truth be told, I think that Amalie Bruun’s black metal offerings are quite mundane affairs that hardly contribute anything new or exciting to the genre. Then this brand new live album entitled "Mausoleum" turned up in my mailbox and that completely altered my perception of what Myrkur can actually do, musically and sonically.

In some ways, I guess you could say that "Mausoleum" is a counterpoint to her earlier offerings or at least a reinvention of her own music. Why is that? Well, the entire album (which is only 27 minutes long) was recorded live at the Vigeland Mausoleum in Oslo and features the beautiful vocals of Bruun accompanied by the haunting voices of the Norwegian Girls Choir and the undisputed talent of former Ulver member Håvard on guitar. The outcome is a chilling and moody journey through the Scandinavian netherworld that is not only captivating and addictive, but also strangely unsettling. Contrasts wrestle with each other within every song. Light, darkness, beauty, loss, and longing all come into play and are intimately portrayed by means of emotionally charged vocals and a near-perfect combination of acoustic guitars and piano. Despite the morose and melancholic quality of it all, the album has an uplifting feel to it as well. I am not quite sure why that is, but it is there. The acoustics and reverberating sounds are a joy to listen to, and although the instrumentation is rather sparse, believe me when I say that the combination of the choir and Bruun’s vocals sounds full and rich in tone and color. The album is epic in scope, yet intimate and delicate too. Last but not least, the cover of Bathory’s "Song to Hall Up High" borders on the surreal.

As I mentioned earlier on, Myrkur’s black metal albums are a bore to me, but this one right here, "Mausoleum", is truly a great live album that deserves a wide audience. I wish that Myrkur would just keep releasing albums similar to this one. It has grace and subtlety to it, but it will chill you to the bone as well. Remarkable!