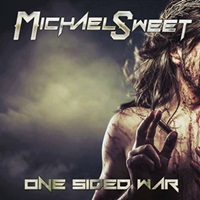 Stryper’s Michael Sweet has been rather productive over the past decade: five releases collectively from that main band as well as four others between a special Sweet/Lynch project and of course his solo career since 2009. "One Sided War" is his seventh overall solo album, packed with a great lineup of musicians in the form of Whitesnake guitarist Joel Hoekstra, Evanescence drummer Will Hunt, bassist John O’Boyle and second guitarist Ethan Brosh. Deciding from the get go to showcase a lot of his early melodic hard rock and metal roots, these 11 tracks (plus a bonus duet of another song, which we’ll cover later) dig deep into the heart of late 70’s/mid-80’s influences, meaning you’ll get lean and mean hooks and melodies on both the vocal and music fronts.

The shredding guitar action and upper register resonance from Michael makes "Bizarre" an early highlight right out of the gate, an opener that melds together classic early Van Halen and Dio-period Black Sabbath in terms of grace and musicianship. "Can’t Take This Life" has a rhythmic platform that can be very modern in terms of it’s low-tuned main riff, Will’s double kick work steady as the uplifting chorus will be sung from the rafters. Joel and Ethan get ample opportunity as focal points on axe play – injecting all of their technical training and being thoughtful while also exciting. Iron Maiden and Judas Priest riff-oriented numbers such as "Golden Age" and "Comfort Zone" give the listener a heavier side, while "Radio" and "One Way Up" feature a little more southern rock meets country side to the proceedings.

The closing bonus track is an alternate version of "Can’t Take This Life" – featuring 16-year old female singer Moriah Formica performing this as a duet – her voice sitting comfortably in the mix a la Lita Ford meets Lzzy Hale, kudos to Michael for giving her the chance as she will be going places. "One Sided War" actually has many dynamic sides, making this record one of the best solo records of his career. Who says you can’t still be active in hard rock and metal in your 50’s? Not this guy…