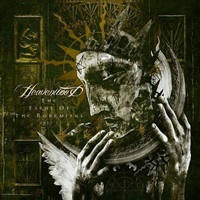 HEAVENWOOD – The Tarot of the Bohemians – Part 1

Returning to their first label home, Portuguese occult emotive metal act Heavenwood ambitiously delivers part 1 of a conceptual series tackling the French occultist Papus and his studies of the Tarot. Having previously heard their third album "Redemption" from 2008, going in I expect a similar roller coaster adventure in terms of dark riffing, gothic embellishment, and melodies that are morose, melancholic, and occasionally heavy.

Fluctuating between more melodic, semi-commercial fare like "The High Priestess" and "The Lovers" and sonically charging material such as "The Emperor" and "Strength", the 13 songs certainly take you on a mind-bending journey, the band smart enough to diversify their songwriting as to not overwhelm or make things one-dimensional. You will gain a lot of fiery, quick hitting leads, occasional exotic chord combinations, and the duality of clean/growl vocals depending on the needs or mood of a particular arrangement. The closing song "Frithiof’s Saga" is a re-recording of a song from their debut 1996 album "Diva", taking advantage of the production nuances of today to give the arrangement more depth in terms of the choirs and orchestration.

Guitarist Ricardo Dias also handles vocal duties with Ernesto Guerra, with guest Sandra Oliveira appearing as necessary for supplementary female voice work – all three very capable of telling these stories in a dramatic, forceful, and ideal fashion – embracing the lyrics and honing in on the right feel and textures. The three-piece employ a number of session /guest musicians to fill out the bass and drums, but this never sacrifices the consistency from first track to last. Similar to countrymen Moonspell, Heavenwood embrace a wide swath of influences – sometimes gothic, sometimes doomy, sometimes heavier or more atmospheric – and tailoring this detailed approach into palatable, catchy four to six-minute timeframes.

Anticipation grows for the follow-up, as "The Tarot of the Bohemians – Part 1" sets the bar high for Heavenwood.