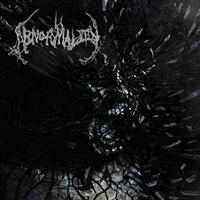 Coming together in 2005, Marlborough, Massachusetts extreme metal band Abnormality have a new deal in place with Metal Blade, and the fruits of their hard labor come bursting through on this second full-length "Mechanisms of Omniscience". Keying in on technicality while retaining hooks and mid-tempo groove sections can be a delicate balancing act, but the quintet uses their abilities in proper, dynamic fashion to never overload the listener with too much that can’t be handled.

Sure blasting sections and intense tremolo picking can elevate opener "Swarm" and "Cymatic Hallucinations" to tsunami levels of energy expulsion for guitarists Jeremy Henry and Sam Kirsch as well as drummer Jay Blaisdell, while bassist John Staples hones in on keeping the low end firm and tight for the lightning quick segment transitions. Horror-oriented keyboards signal the beginning of the slower, mid-tempo chugger "Synthetic Pathogenesis"- at least until the 1:18 point when another insane round of hyper-snare hits and wrist spraining axe licks command the spotlight. When Abnormality choose to lay on the thick riffs at a normal mid-tempo death metal template, expect a lot of comparisons to Suffocation or even 80’s period Slayer, the way the musicians attack and surrender to open up more hook possibilities while still remaining true to themselves and the genre at hand.

Not to mention the vicious growls and screams from Mallika Sundaramurthy put her in league with the best in the business – deeper than ex-Arch Enemy’s Angela, more in line with Cannibal Corpse or Sinister in terms of chill bumps and brutality. Check out her work on the atmospheric closer "Consuming Infinity" or the stinging math maze title track attack where she is able to match the proceedings in a rhythmic cadence. Smartly keeping the playback to under 40 minutes allows the material to sit well through each successive pass – but most technical death metal fans will find "Mechanisms of Omniscience" quite easy to digest because of incredible musical hooks and deadly tempo shifts where the riffs will leave people sweating in comfort.

There’s a reason why Abnormality made an appearance on the video game "Rock Band 2". Those who live for relentless death metal from the US need this band in your lives.