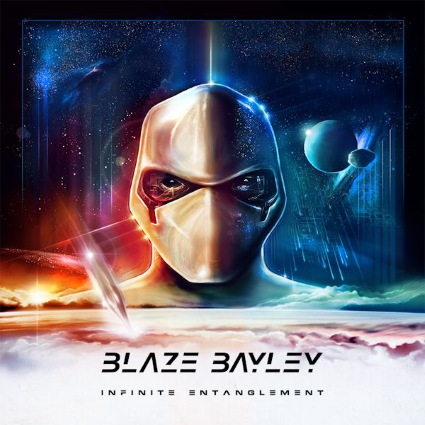 Blaze Bayley (ex-Iron Maiden, Wolfsbane) has to be one of the hardest working musicians out there today. The guy is constantly touring and writing new music, not to mention guesting on other people’s albums and releases. If you have ever been fortunate enough to meet him, you will know that he is one of the coolest and most fan-friendly dudes one can ever hope to meet. The man simply rules, of that there can be no doubt. Granted, many Maiden fans are not particularly fond of the two albums he cut with the band, but I love them and listen to them all the time. As to Blaze’s solo albums, I think the majority of them are excellent and contain a lot of quality tunes. However, nothing beats his two live albums, namely "As Live As It Gets" and "The Night That Will Not Die". Those are damn near monumental. Full of intensity, aggression, enthusiasm, and great songs.

"Infinite Entanglement" is the eagerly awaited new album by Blaze Bayley consisting of eleven songs and a conceptual theme revolving around a science fiction story written by Blaze himself. The riffs and melodies are extremely catchy and memorable while the lyrics are engaging and intelligent. Blaze’s voice is strong and booming throughout, and the musicianship is simply excellent all around. You can really tell that Blaze is into the lyrics and melodies; he sounds extremely inspired and enthusiastic throughout the entire disc, and nearly every line of his is quite emotionally charged somehow. I absolutely love the use of acoustic guitars, violin, and piano on the album, a great example of how a couple of these are used to great effect being "The Dreams of William Black", which is a haunting, mellow, and melancholic piece that is both beautiful and unsettling.

Some songs are better crafted than others, and while "Calling You Home", "Human", "A Work of Anger", and "Solar Wind" are extremely good, there are a couple of songs ("Dark Energy 256" and "What Will Come") that are slightly below par. However, in the overall perspective, we are dealing with one ass-kicking record here. I am not disappointed or anything like that, but it does lose a bit of its momentum due to those less-than-stellar tracks. Apart from that, "Infinite Entanglement" is a classy and well-written album that oozes quality. I love the fact that it is so varied and that it has so many different nuances to it. Actually, some of the riffs and pieces remind me of "Virtual XI" by Iron Maiden, and to me that is a great thing. Fans of heavy metal in general ought to check this one out and support Blaze Bayley. "Infinite Entanglement" rules!

WISDOM – Rise of the Wise