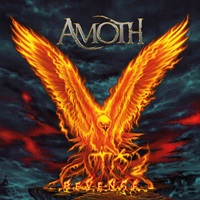 Finnish progressive heavy metal band Amoth return with their second album "Revenge", a quartet of musicians who incorporate a varied sub-genre amalgamation that works well and gives listeners plenty to sink their teeth into. You can expect drop on a dime mood altering riffs and tempos – equally provocative and majestic melodies, and anything from thrash and progressive rock to heavy metal, jazz, and ambiance in these 9 songs.

The short opener "Die Young" for instance starts with this Morse Code like drum movement that would make Neil Peart beam, while the chorus has a huge multi-part harmony that is in line with Iron Maiden – while the jazz/samba break throws the ears for a loop. The array of riffing and time signature changes puts vocalist Tomi Kurtti in challenging positions, especially in faster sections of "…And So They Fueled His Veins…", but his lower register gains recognition during the ballad "Children of the Night" – one of the rare numbers where serene, clean picking and a steady swing shuffle are more in line with a traditional arrangement instead of being overly progressive.

Putting a foothold on where Amoth comes from can be a tricky proposition – heavier guitars during "Shadow of the Beast" come from a Metallica stance, but the overall tempo is more in line with traditional metal, but then the 7:34 closing title track features everything from blast beats and arpeggio runs to crazy snare/china hits and lighter, cosmic and almost new age fare. Safe to say that this band marches to their own passions – be it Maiden, Steve Vai, or wild jazz.

"Revenge" contains almost 45 minutes of entertainment value, a progressive metal cocktail that should provide numerous playbacks where you gain something new and different – ideal for Amoth in terms of long-lasting impact.

WISDOM – Rise of the Wise