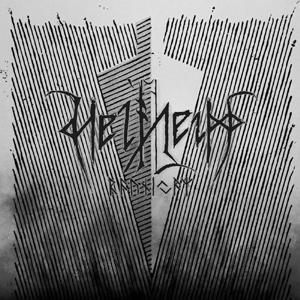 The legendary and uncompromising Norwegian viking metal entity that is Helheim is back with yet another brilliant slab of thought-provoking and highly evocative music that will grab a hold of your puny soul (and tiny mind) and take you on a musical journey you will never forget. One of the things that really fascinates me about Helheim is that these guys keep getting better and better, which is to say that both their albums and live shows have gotten better and better over the years. That is in and of itself a very unique quality that only pertains to very few bands and artists out there. I guess what I am trying to say is that Helheim is something else. Something that is ever-evolving and somewhat unpredictable. These guys do not follow any rules, guidelines, or musical conventions. They transcend all of that shit. Have you ever listened closely to songs of theirs such as "Viten og Mot (Sindighet)" or "Det Norrøne Alter"? Truly listened, I mean. There are things in there that will never leave you once you start reflecting on the lyrics and the themes and riddles hidden within them. That is the thing with Helheim; it is not always about what is said in the lyrics, but rather what they do not say. I know that sounds cryptic, and, as usual, I digress, so I shall spare you any further philosophical musings of mine. Let us cut to the chase and focus on this brand new 5-song album of theirs, shall we?

The opening song, "Helheim 9", basically concludes the 9-part line of "Helheim" tracks that have featured on the last (you guessed it) 9 releases. It is not only a fitting and very moody conclusion to the whole thing, but also a great introduction to the songs that follow it on "raunijaR". It instantly sets the mood and draws you in, just as I was hoping it would. The clean vocals compliment and enhance the atmosphere of the song beautifully. A solemn and yet uplifting tune.

The title track is a raging and epic beast of a song that constantly mutates and transforms itself into…well, fuck me if I know, but it rules beyond belief. It is as if it has a sense of restlessness to it, almost as if there is a sense of longing in there somewhere. Try listening to it a few times in a row and you will see what I mean. It is delightfully intense and yet stranglely otherworldly. Definitely one of the best Helheim compositions ever. I kid you not.

Next up are the two final pieces of the mindblowing puzzle that is the "Aagards Fall" EP, and they possess a hypnotic and trance-like quality that I cannot quite translate into words, but they are neither monotonous nor linear pieces. The spoken word vocals are haunting, and the melodies and riffs are superb. Musically, they harken back to the aforementioned EP, but in no way do they sound out of place here. On the contrary. They fit right in. Some of the parts even remind me of one of the greatest albums of all time, namely "Twilight of the Gods" by Bathory.

"Odr" is a most fitting end to an all-out brilliant musical assault. A mournful and moving song in many ways, but with a lot of clever arrangements to it. Words are futile. Just experience this for yourself, will you?

As to the album as a whole, the musicianship is simply excellent and the production fits like a glove. All the songs are incredibly varied and dynamic, and the epic and bombastic nature of the album is mindblowingly awesome. Unless you are one of those narrow-minded losers who are stuck in 1995 and only dig "Jormundgand", I pretty much guarantee that "raunijaR" will blow you away. You have to be patient and you have to listen to it many times over, preferably in a row, in order to thoroughly grasp the majestic scope of this work of art and penetrate its many layers of sounds and nuances. All those twists and turns will leave your head spinning. This is one musical journey that you do not want to miss out on. Trust me on that.