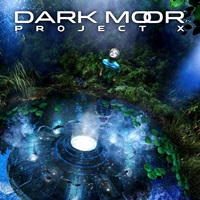 Spain’s Dark Moor continue to throw key fresh nuances to their established symphonic oriented power metal template, as their tenth studio record "Project X" contains more of a theatrical Broadway production sheen in terms of the vocals, choirs, and keyboard elements. A concept record set in the year 3023, tracks like "I Want to Believe" and "Beyond the Stars" have as much Meatloaf and Queen involved in the arrangements, structures, and mood settings to possibly distance themselves from pure power metal and into more commercial melodic terrain.

Vocalist Alfred Romero appears up to the challenge, stretching out a lot of his mid-range and semi-high delivery to connect visually for the science fiction lyrical landscape. Know that guitarist Enrik Garcia often plays a secondary role to the abundance of keyboards setting the tone, but he picks a great spot mid-album for "Bon Voyage!" to excite through his careful and energetic lead break. You just get the feeling that through a lot of the keyboard hooks and vocal harmonies in a song like "The Existence" the quartet want to experiment a touch with some 80’s AOR tricks, while they decide to pump the energy in familiar power metal territory for the follow up "Imperial Earth". Saving the longest track for the finale, "There’s Something in the Skies" opens in a serene, sparse manner through piano and Alfred’s theatrical mannerisms, the middle instrumental portion dramatic for drummer Roberto Cappa while the back and forth choir/ main vocals give off that Meatloaf/ Queen vibe once again before a classic rock guitar feeling kicks in.

Give credit where it’s due, Dark Moor risk losing purists for the sake of following their creative desires. In the end, "Project X" could easily open the band up to outside audiences, and is a fine example of the far reaching power of metal today.

DE PROFUNDIS – Kingdom of the Blind