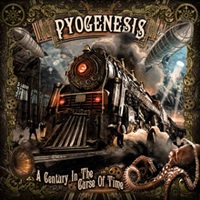 PYOGENESIS – A Century in the Curse of Time

Diversity is the spice of life- especially when it comes to music. For every artist that subjects its listeners to a steady diet of what they’ve come to expect, you have others who insist on serving up product a little different each and every time. Even if it could be to the detriment of long-term acceptance on a grand scale. Such is life for Stuggart, Germany alternative rock/ pop punk/ gothic oriented quartet Pyogenesis. Originating in the early 1990’s with more of a death/doom metal vibe, by their second album "Twinaleblood" the transformation to their current style would be complete. After a decade long absence from the scene, their sixth studio record "A Century in the Curse of Time" keeps the integral musical stew approach front and center.

Certain songs have that Paradise Lost/ Type O Negative-like darkness amidst the alternative rock grooves- "Lifeless" the clearest example – while others move along at a punk-oriented pace, the vocals and guitars for opener "Steam Paves Its Way (The Machine)" abrasive and raw while guitarist/keyboardist Flo Schwarz offers up commercial melodies during the softer chorus moments. Malte Brauer’s fuzzed out bass carries "A Love Once New Has Now Grown Old", the background vocals pure pop punk nirvana while the instrumental section carries a lot of U2/The Police groove qualities if put through the Pyogenesis ringer.

A probable future set-list favorite due to its infectious drumming maneuvers, "The Swan King" has uplifting vocal harmonies which makes the anthemic, call and response chorus that much more impactful – Americanized in a twisted, alternative meets AOR rock manner. And then you have the 14 minute plus title track closing the record – throwing everything at you as far as progressive, doom /gothic rock, longer keyboard refrains, drum parts straight out of the classic Zeppelin playbook as well as some heavy duty electric to acoustic transitions in the guitar department.

Understandably cult-like, Pyogenesis is not for everyone – but those willing to accept their unique outlook will be rewarded by a fine, eclectic record.