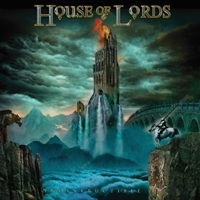 There’s something to be said for consistency in any band or genre. House Of Lords in their second go around certainly have been the measuring stick for said benchmark – as "Indestructible" is their 10th studio album in their career, and 7th since their resurrection in the 2000’s. It’s helpful that vocalist James Christian has assembled a strong group of players around him that have been together now for a decade, so the chemistry and integrity can’t be called into question.

The 11 songs in the main possess a lot more teeth and classic hard rock bite, while not forsaking the classic HoL trademarks in terms of hooks, melodies, and multi-part chorus vocal harmonies. The title cut for instance featuring a mid-tempo pulsating riff, keyboards that wrap-around said riffing, and drumming that has this shifty sensibility that would make Zeppelin or Deep Purple fans go crazy. The follow up "Pillar of Salt" has a breezy clean guitar vibe, allowing James a chance to stretch more of his higher pipes in an airy manner, very bluesy during the pre-chorus and then shimmering in AOR glory during the chorus. Dynamics are very important to any House of Lords record, so even the ballad "We Will Always Be One" isn’t relegated to standard fluff factory treatment, the emotional build up and transitions instrumentally making this a top notch number.

Due to today’s technology the band is able to keep the production quality as high as possible without over processing, making the heavier "Ain’t Suicidal" and appropriately revved up "100 MPH" ideal crunchy affairs for melodic hard rock followers to treasure. Kudos to guitarist Jimi Bell, keyboardist Jeff Kent, bassist Chris McCarvill, and drummer B.J. Zampa along with Robin Beck on background vocals for giving their all for the sake of strong performances and rich songwriting – as I don’t feel there’s a weak song in the bunch for "Indestructible".

If you’ve loved the last few House of Lords albums, this is a no brainer to buy as well. Keep melodic hard rock going strong people, it’s not all nostalgia folks.