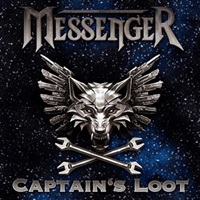 As a special treat for the fans, German heavy metal quintet Messenger have decided to issue "Captain’s Loot", an 8 song effort that features rare cuts and cover songs from some of their favorite artists through the years. 3 originals including an updated version of their second album title track from 1994 "Asylum X-T-C" and the 8 minute long opener "Sign of the Evil Master" that has that fiery marching tempo and varied melodic/aggressive vocal tone that should work for fans of Manowar and Helloween – the latter especially in the back and forth guitar instrumental sections.

Of the 5 covers, "Kill the King" shouldn’t really be a surprise, but you wish that more acts would dig a little deeper into the Rainbow catalog and pick different tracks ("Starstruck" or "Gates of Babylon" perhaps?). "Don’t Talk to Strangers" is one of my favorite Dio songs from "Holy Diver", although vocalist Francis Blake is better at the more emotional parts than he is in terms of Ronnie’s obvious note purity and pipes. Rounding things out with two Running Wild covers in "Port Royal" plus "Black Bone Song" and the classic Helloween song from "Keeper of the Seven Keys Part 2" with "Dr. Stein" – you can tell where Messenger’s love of heavy metal and influences come from.

"Captain’s Loot" may not necessarily be mandatory if you want a full selection of their own tracks – "Starwolf- Part 1: The Messengers" or "See You in Hell" are Messenger albums that can give you the bigger picture of their creativity. But this is not a bad little package to pick up, as the German heavy metal scene continues to roll along.