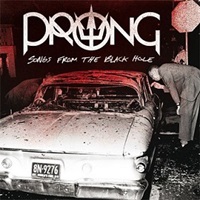 PRONG – Songs from the Black Hole

It appears that the ‘covers’ record can be just as prevalent in today’s heavy music scene as the double live record was decades before. Whether it’s a stop gap measure for bands to gain more time for writing follow up records or truly a tribute to their influences I think needs to be looked at on a case by case basis. New York’s Prong have unleashed two fine studio albums over the past four years in "Carved into Stone" and last year’s "Ruining Lives" while touring the globe, so I consider this 10 song record "Songs from the Black Hole" a deeper study in where Prong’s roots lie, and giving their influences (as well as fellow bands in their particular scene) some much needed love and affection.

Digging into the hardcore, punk, and crossover scene – you’ll get interpretations of songs from the Butthole Surfers ("Goofy’s Concern"), Black Flag ("Bars"), and Fugazi ("Give Me the Cure"), along with scene shapers that Prong knew well during their early CBGB’s days like Bad Brains ("Banned in D.C.") or Killing Joke from the UK ("Seeing Red"). The trio appear to have fun taking on these classics and putting them through the Prong grinder – Tommy’s voice one that can be vicious, punk, and melodic all depending on the feel of the song at hand. The surprise for me would be the Neil Young cover that closes things, the 6:52 "Cortez the Killer", something very laid back but given an adequate bluesy interpretation.

Whether or not this is essential to your Prong collection I think depends on your dedication or devotion to this NY trio. "Songs from the Black Hole" peaks into their love of crossover music and appeal to a wide faction of heavy music fans, so consider this a possible historical document for their discography.

THE CLAN DESTINED – In the Big Ending