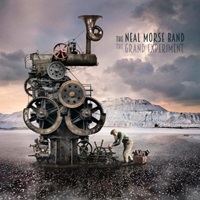 Involved in Spock’s Beard, Transatlantic, and Flying Colors through the years, Neal Morse is a progressive rock icon, especially for the current generation of fans to savor. "The Grand Experiment" is his latest studio record with The Neal Morse Band, also pushing the talent of drummer Mike Portnoy, Randy George, Bill Hubauer, and Eric Gillette – a 5 song album that contains 3 normal length tracks in the 3:51-6:32 range, bookended by two epic cuts (the final one "Alive Again" almost taking up 27 minutes).

The title cut has more of that airy, King’s X meets The Beatles psychedelic vibe, the harmonies and hooks instantaneous while the guitar hook and drumming very restrained and in the pocket. The 10 minute opener "The Call" has a vocal only opening that is reminiscent of classic Eagles, the keyboard/drumming interaction quickly launching into a progressive rock cat and mouse chase. "Agenda" is a slower, almost carnival-themed song that sets up the adventurous "Alive Again"- showcasing all 5 musicians and their ability to think small and big on an interplay/ chemistry / feel basis.

Writing with no pre-conceived notions prior to entering the studio for the first time ever, Neal really relies on the professionalism of his band mates- and they do not let him down on "The Great Experiment". Ideally this free form thinking is the essence of high quality progressive rock – building and diving into broader territory, canvasing the shades and textures rarely exposed in conventional parameters. A treasure trove for those who have followed Neal’s wide discography.