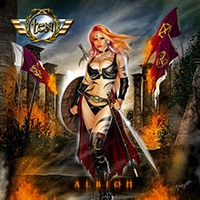 The 11th studio album from UK melodic hard rock band Ten, "Albion" derives its name from the earliest documented name for the collective British Isles from the time of Queen Boadicia. This 10 song effort from the seven-piece is another polished and professional outing for those who love majestic hard rock full of melodic choruses and a lot of Whitesnake, Asia, or Dream Theater reference points. The lead guitar play between Dann Rosingana and Steve Grocott is on point and complimentary – emotive as well as exciting on highlights such as "Battlefield" and the bluesy "Die For Me".

Songs such as "Alone in the Dark Tonight" and "A Smuggler’s Tale" also have literary reference points lyrically, as vocalist/guitarist/ songwriter Gary Hughes exposes his listeners to books by Emily Bronte (Wuthering Heights) and Daphne Du Maurier (Jamaica Inn) respectively. Certain songs have a little bit more of a cultural theme in terms of the musical arrangement, with the melody lines often working in tandem based on the feel at hand – check out "Albion Born" for this mid-tempo marching number that resonates for its back and forth, call and response vocal template and folk-like keyboard/guitar syncopation. Gary excels at the development of texture and digging deep to convey accurate human emotion – especially in a moving ballad like "Sometimes Love Takes the Long Way Home", where less moving parts instrumentally can often become so much more.

At this point, you know what you pretty much are going to get from this UK band – and they are certainly one of the best in delivering a bluesy form of melodic hard rock with occasional progressive/AOR nuances. "Albion" continues in their long line of exemplary discography, and would be a wise point of entry for those who haven’t taken in Ten to date.