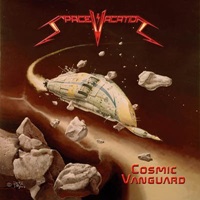 The third record for heavy metal band Space Vacation riles up all the aspects that made me a fan of a genre for life: the high octane power of striking the right guitar chord, the strong bass thump, the explosive grooves and tempos, and hooks aplenty from all areas of vocal melodies/harmonies as well as the twin guitar factor. "Cosmic Vanguard" possesses a lot of road-tested ideas, and as a result proves to be their most engaging, entertaining full-length to date.

Guitarists Scott Shapiro and Kiyoshi Morgan seemingly ignite their fretboards, the vitality propulsive after each and every airing for "Say My Name" and the speedier, double bass infused title cut. The brief "On Your Feet" instrumental intro has a lot of that "Ides of March"/ "Killers" era Iron Maiden meets early Def Leppard quality, where you can sense unison audience engagement before the mighty "More Is More" roars forth from your speakers. There are so many hooks to catch your attention in this song, from the beginning lead break to the up and down vocal parts of Scott and the simple but effective chorus – this is one of the anthems of 2014 for sure! "Battle Jacket" is another speed burner in the early Metallica mold, drummer Cubby Baumann wailing away on the snare, double bass, and fill parts as bassist Mark Shapiro keeps his fingers free flowing in chase to the Scott/ Kiyoshi dual guitar action – along with a neo-classical lead twist towards the second half of the song.

Equally adept at more mid-tempo terrain such as "The Living Damned" that is like a marriage of Saxon and Angel Witch beyond their traditional and speed tendencies, everything from Thin Lizzy to early Van Halen comes to mind throughout, and a good time should be had by all who yearn for that type of sound. The best song on here for my tastes is "Get Down" – every time I hear the spider web guitar parts and multi-part vocal harmonies, I end up losing myself to the aural journey that this track makes me undertake. 44 minutes that invites incessant airings, should fire up every party and gathering as you crack open your favorite beverages and talk shop.