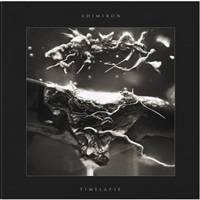 The fourth studio album from Italian progressive thrash/death act Adimiron "Timelapse" is my first exposure to this five-piece …but certainly will not be my last. The 9 songs on this release fuse together vocally the best elements of Machine Head and Fear Factory, while musically I hear a lot of throwback elements to Anacrusis, occasional nods to North American blast beats and then this supreme guitar chug that made Gojira superstars.

"Liar’s Paradox" has this progressive side-shuffle during the instrumental section between the drummer and guitarists while the bassist pounds out math/ morse code parts – "Collateral" as an opener sets the mood through a tribal rhythmic open-ended arrangement against clean guitars before the main cyber-oriented vocals take over a la "Screams and Whispers" era Anacrusis. Tranquility versus intensity appears to be the see-saw that Admirion balance brilliantly – check out "The Burning of Methuselah" as vocalist Andrea Spinelli spits out the words as if channeling Robb Flynn and a touch of Burton C. Bell while the riffs move circular and the bass often takes center stage leading the odd segment twists while still maintaining a sensible hook and groove pattern.

Bands are realizing that you can be Progressive without falling off the tracks – there’s no sense repeating what Meshuggah begat, instead it’s more important to take your favorite aspects of metal bands and try your best to blend them into a coherent, original take. Guitarists Alessandro Castelli and Thomas Aurizzi wheel and deal a bevy of layered, intricate axe skills – filling up the sound from a heavy perspective on "The Giant and the Cow" and then from a left field, dissonant arena on highlight "The Furnace Creek". An equally abstract cover should intrigue most, and I feel that "Timelapse" could have a broad cross section of thrash, death, and progressive minded taking to the Adimiron sound.