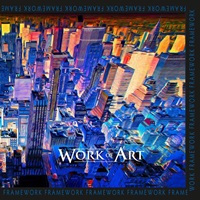 Sweden is the birthplace of many iconic musicians and bands in all facets of the music scene. Work Of Art is a melodic rock/ AOR oriented band from that same country, immediately taking the world by storm through their debut self-titled album and their follow up of 2011 "In Progress". Melding the best aspects of those two genres- rich harmonies, bright keyboard passages, overriding hooks, and the shimmering melodies that just careen in your brain and body timelessly. Three years later "Framework" hits the streets, so could the trio deliver another grand slam record that reminds people of the heart and soul of melodic rock from the 1980’s?

You better believe it. It’s hard to imagine the best aspects of Toto, Journey, and Giant all coming together as one, but that’s what you get through these 11 songs. Multi-part, uplifting choruses make "Don’t Go" and "How Will I Know" early favorites. Addictive keyboard tones propel "How Do You Sleep at Night" and opener "Time to Let Go" to West Coast heights, the latter in line with the debut album work of Richard Marx (a distant reminder of "Should’ve Known Better"). You may think everything is simplified, but the heart of these songs lies in the little details – the correct focus on back and forth melodies from all the artists, stunning guitar passages that fall directly in line to the song at hand but still showcase superior technical ability, and appropriate dynamic texture to let the songs and moods flow cut to cut.

Vocalist Lars Säfsund has a natural four octave plus range, in line with Toby Hitchcock from A Pride of Lions, and maybe a touch of Michael Sadler of Saga – he can handle the energetic, up tempo numbers, use more of his lower register on something subdued and commercial such as "Over the Line" or open eye sockets in tears on the ballad "My Waking Dream". Guitarist Robert Säll isn’t afraid to throw down a little Whitesnake/ Randy Rhoads-like action on certain songs either – giving "The Machine" and "Shout Till You Wake Up" a little more muscle amidst all the AOR, melodic proceedings.

I’m throwing around a lot of names, but what’s indisputable is Work Of Art is probably the best international band going if you want melodic rock done the best way possible. "Framework" shall create another half dozen classics in their repertoire, and if you miss hearing the spirit of "Frontiers", "Isolation", or "Last of the Runaways" in any band for 2014, this will resonate deeply.