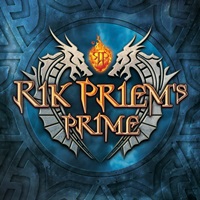 I feel it’s very important in the melodic hard rock genre to surround yourself with true talent – as the competition can be fierce. In the band project Rik Priem’s Prime, the named guitarist picked some noteworthy musicians that have years of seasoning in other acts. Vocalist Carsten Schulz has been involved with Evidence One, Frozen Rain, and numerous other recording sessions. Drummer Rami Ali is familiar through his work in Freedom Call, Iron Mask, and Evidence One as well. Rounding things out are keyboardist Geert Margodt and bassist Vincent De Laat – so let’s delve into this debut 13 track self-titled record, and see what comes through my listening device.

After a tranquil set up instrumental in opener "Sunset over Agartha", the bluesy driving "Babylon Rising" comes out, filled to the brim on strong guitar hooks, the right keyboard foundation to emphasize those chord choices, and Carsten’s high caliber melody choices. Rik’s fiery skills penetrate throughout, much like the best guitar heroes of the past like Blackmore and Rhoads, just in more of a rawer interpretation, the tones coming through with an in your face manner. Highlights are plentiful – check out the shredding meets melodic run overtone in "The Future Is Now" or the low down organ/ groove and solid crunch for instrumental "Chameleon" that will have many thinking of a folky meets MSG/ The Scorpions vibe, before transitioning at the 1 minute mark to a shimmer Satriani meets AOR vibe.

The versatility continues throughout – the classic ballad "Kneel before the Pieces (Of a Broken Heart)" has that Whitesnake harmonic charm circa their self-titled American record explosion, while "Run Angel Run" and the 6 minute closer "Child of Anger" get back to the heavier side of their melodic hard rock/ metal offerings. This album will slot in very well with people who love At Vance, the softer sides of Silent Force, and others in that strong singer meets guitar hero songwriting mold.

In other words, this is a high class effort in the European style that will receive a lot of airplay through my years.