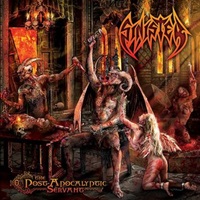 What else can you do if you are the Dutch death metal band Sinister that you haven’t tried before? Keeping the same lineup as 2012’s "The Carnage Ending" is a start (and first for the band’s career) – but on their eleventh album "The Post-Apocalyptic Servant" the quintet decide to tackle a conceptual record for these 10 songs concerning evil ghosts ruling the world after the apocalypse- and humans deteriorate into mutant slaves. e

The Sinister style is very fast, brutal, and savage – leaving everything out on the table and blasting away to insane speeds, followed by equally vicious time changes that can create this riff swirl of pit madness. Drummer Toep Duin and bassist Mathijs Brussaard have their work cut out for them – switching up from inhuman blasting and picking to this steady, solid powerful death groove, working to perfection on the slightly cinematic "The Sculpture of Insanity" and then breaking necks for the slower, semi-Testament oriented "The Dome of Pleasure" (think back to "The Legacy" album here). Guitarists Dennis Hartog and Bas Brussaard employ a number of speed licks, tricks, and dive bomb maneuvers that have equal footing in the Florida and European death molds – some of their best work coming in on "The Macabre God" and the Slayer-esque "The Art of Skin Decoration" where the layering of riffs and stop/ start accents is excellent beyond belief.

And then there is vocalist Adrie Kloosterwaard. He has a dual responsibility to be deep in his growls and yet clear enough to properly make out the stories told within these lyrics – and he succeeds on the slower, more controlled "The End of All That Conquers" just as much as the sicker/ faster "The Burden of Mayhem". It’s a true challenge to keep things even, balanced, and clear when performing such vicious death metal – and I think Sinister deliver for the most part (sometimes the open snare sound can be grating, a minor qualm).

The digipack includes 3 bonus covers from Morbid Angel, Paradise Lost, and Agent Steel as well as their video for "The Science of Prophecy". Two for two with this lineup, Sinister are not slowing down for anyone – and as such this Dutch death metal troop roll forward in their approach for true fans of the genre.