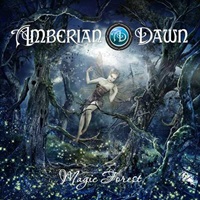 The fifth proper studio album (as last year’s "Re-Evolution" featured re-recordings of previous songs for their new vocalist Capri to sing on), "Magic Forest" adds another 10 songs to this Finnish group’s symphonic, melodic metal register. A new record deal represents a fresh start, and after a few exposures to the uplifting "Dance of Life", double bass fueled "Son of Rainbow", and tender, symphonic/ theatrical ballad closer "Green-Eyed" the formula has not varied much for this veteran group- which can be a good and bad deal depending on your perspective.

The keyboard tonality choices for Tuomas Seppälä are very flowery, right from the get go on "Cherish My Memory" where Capri during the chorus almost channels the brilliance of Olivia Newton-John meets ABBA in terms of the melodies and harmonization and we get a little progressive bass work during the conclusion. At 10 songs and just under 40 minutes Amberian Dawn do not believe in excessive instrumental bloating – preferring to get to the hook and heart of the song quickly and then move onto their next idea. Possessing two guitarists outside of Tuomas’ occasional contributions, I just wish they would be used more effectively instead of certain tracks being swallowed up by layers of keyboard action – the title track and "Warning" two songs where less could have been so much more.

Non-offensive melodic symphonic metal mavens who seek out more Nightwish oriented material will lap "Magic Forest" up – but I doubt Amberian Dawn at this point in the game will conquer new territory. As such, I find this album not really setting anything ablaze in the brain matter and probably will be relegated to a very sparse, occasional playback.