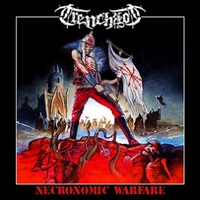 Hailing from Philadelphia, Pennsylvania, Trenchrot is a relatively new entry into the death metal field. Starting in 2012 with one demo "Dragged Down to Hell" to their credit one year later, we now get to hear their debut album "Necronomic Warfare"- and this should be very entertaining for those who love the mid 1980’s to early 1990’s sound from both North American and European acts.

Vocally guitarist Steve Jansson has that gravelly John Tardy chilling voice down to a tee- although a little more discernable that this Florida veteran. Musically the quartet can be quick and speedy when called for (check out the pummeling "The Most Unspeakable of Acts" or blasting, off to the races nature within "Maddening Aggression") but also have the mid-tempo galloping element that can sure whip up an audience into some friendly head banging such as "Mad Dogs of War" or the low hypnotic insanity for "Trapped Under Treads". If I had to think about bands they have in common, it would be early Death, Bolt Thrower, and possibly a little bit of Goreaphobia. Expect a wall of crushing sound that isn’t for the meek- very primitive and much like how I would think Trenchrot will come across in live clubs filled with proper amplifiers.

Not every lead break is spot on – "Dragged Down to Hell" for instance seems to be more about the wild squeals than anything technically fluid – but in the end isn’t that what death metal is supposed to be about? Taking risks, moving from the gut, and somehow developing something that audiences can latch onto? Trenchrot could have a lengthy, steady underground following because the songs on this record stick to old school death metal ethics and execution.

DAYS OF LOSS – Our Frail Existence