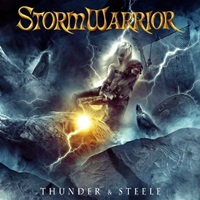 German power metal is an institution. What began with Helloween in the mid 1980’s still exists today- especially in the minds and hearts of not just the fans, but acts like Stormwarrior. "Thunder & Steele" is the fifth studio album for the quartet- and first for latest drummer Jörg Uken who came into the band last year. When it comes to the music and lyrics, the tenets remain clear: harmony elements need to shine through the choruses and dual guitar runs, double bass is mandatory to drive home the important portions of the songs, and fantasy/ battle topics plus paying homage to the genre take up the bulk of the word focus.

Reference points are easy to find: Gamma Ray, Running Wild, and Helloween are the three major groups Stormwarrior live for, and songs such as "Sacred Blade", the galloping "Steelcrusader", and mid-tempo anthem "Child of Frye" will promote sure fire call and response love from the audience back to the band. Guitarist Lars Ramcke doubles on main vocals, and his melodies and phrasing could pass as the twin brother to Kai Hansen – check out the fiery Running Wild-esque "One Will Survive" for his impassioned delivery that melds seamlessly with the guitar riffs, pulsing bass and kinetic drum tempos. By the time the closing guitar strains ring out on "Servants of Metal", I’m right back to the beginning with the title cut- a good sign that you’ve made an outstanding top to bottom power metal album if you need to return to the record immediately to get more of a Stormwarrior fix.

In terms of their discography I thought "Heading Northe" was the high mark for this band and this style, but I really think they’ve set the bar that much higher with "Thunder & Steele". Better soloing, more memorable riffing, tighter songwriting, and all the right harmonic elements that align to make you scream "METAL!!!". Mandatory for all power metal fans.

DAYS OF LOSS – Our Frail Existence