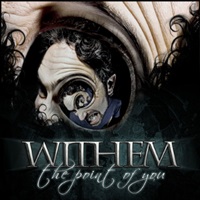 WITHEM – The Point Of You

The Scandinavian progressive metal scene is hotter than molten lava these days. Spearheaded with Pagan’s Mind, Leprous, and Circus Maximus, Norway may finally shed its tag as being known for a black metal juggernaut and actually have outsiders realize there is a wealthy of talent in an array of other metal sub-genres. Withem is the latest act to sign a record deal with international implications, releasing "The Point of You" debut album within 2 years of formation.

You can expect a sizzling sound with strong vocal harmonies, forceful drumming and rhythms, and an adequate balance between impressive musical passages and jaw dropping hooks that are very rare for a band this early in their career. There is everything a person could want that follows progressive metal- shorter, heavier songs like "Miracle" and "Born to Live" that should appeal to those who want more AOR-melodic elements, and then the intricate synchronized parts where rhythms and chord progressions are pushed to the limit as in "Burned By Senses" or "Driven By A Blessing" (the latter giving the spotlight to drummer Frank Nordeng Roe and keyboardist Ketil Ronold).

It all doesn’t matter if the singer can’t match the progressive proceedings, and fortunately for Withem they have Ole Aleksander Wagenius within their ranks. Powerful, engaging, and able to confidently deliver the lower notes as well as the eagle highs, you’ll be impressed right from the first sinister note he hits on "Point of View" on through to his soaring falsetto within closer "Why Me!".

As listeners we should feel fortunate over the wealth of talent springing forth in Norway. "The Point of You" is only the beginning of what I feel will be a very bright future for Withem.