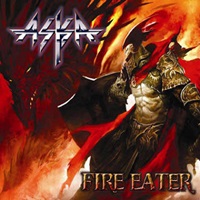 Active in the scene for 23 years, gaining the chance to tour all areas of the globe performing to military base audiences in addition to regular club and theatre gigs, Texas’ Aska fight the good fight for traditional metal. To say people have been clamoring for a new studio album from the band is an understatement- as "Absolute Power" hit the streets in 2007. It’s not as if guitarist/ vocalist George Call has been idling his time away- he was fronting Omen for a while, and currently sings for Banshee and Violent Storm.

But the focus now returns to "Fire Eater"- and if you haven’t heard Aska ever in recorded form, you are in for a real treat with these 11 tracks. George’s vocals are pure, powerful, and gritty all in different waves, depending on the mood of the song. He reaches epic terrain on the culturally sound "Valhalla", and brings out a lot of David DeFeis screams on "Dead Again"- but can also convey a lot of bluesy, heartfelt restraint on the power ballad "Angela" that reminds me of Paul Shortino during his early Rough Cutt days. Imagine a lot of dynamics musically as well – the aforementioned "Angela" featuring dual acoustic guitar work that is aurally stimulating and captivating, while "Son of a God" has this natural Maiden get up and go spirit and "Red Cell" delivers sinister, almost pomp rock keyboard parts against the heaviness that brings out some Dio/ King Diamond power.

And while it shouldn’t be surprising that Aska would cover a Judas Priest song like "The Ripper", the band try their best to make it a little slower and more evil in terms of a tempo feel and the way the chords move back and forth in the arrangement- it sounds very much like how I would expect to hear the band live.

Rarely do you find a band on album number six reaching their apex in a recording career, but "Fire Eater" is the best Aska record to date. All those who love traditional metal in any way: old school or newcomers, buy or die!