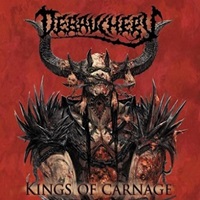 The eighth album from German death metal warmachine Debauchery may have better production skills with Dennis Ward handling the boards- but I didn’t find much to really get gung ho delighted about musically, vocally, or songwriting-wise. Three blood titles ("Let There Be Blood", "Man In Blood", and "Blood God Kills") appears to be about two too many, and the tough guy mother-f bombs make me think I’m taking in hardcore gangsta rap prose rather than a death metal act with occasional hard rock tendencies.

The bass work in "Killerbeast" is something I would expect from an alternative rock meets Coal Chamber/ Korn styled act. "Victory Awaits" contains a strong cultural guitar riff, only to be decimated by the Chris Barnes style vocal gargling of Thomas ‘the Bloodgod’ Gurrath. Slapping in a Dokken meets Kiss riff for "Murder Squad" (think poor man’s "When Heaven Comes Down" meets "War Machine"), you just get the feeling that Debauchery are playing a joke that the audience isn’t privy to… only to realize, they aren’t kidding.

I didn’t even get to hear the 5 bonus cuts on the special edition, where they pay homage to their 10th anniversary as a recording artist by recording their own versions of Accept, Body Count (?), Johnny Cash, and W.A.S.P. covers (I didn’t know Die Fantastischen Vier…) – but one can only imagine a similar vibe as Six Feet Under circa any of their "Graveyard Classics" series.

"Kings of Carnage"? Waste of my time and space to me… good luck to those who wish to venture into these waters.