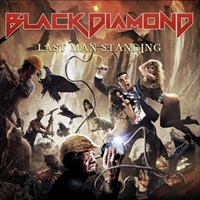 With a start in 2005, guitarists Igor Manasijevic and Nejc Vidmar set about the arduous task of finding like-minded musicians in their native Slovenia to complete their heavy metal band Black Diamond. Taking quite a few years, the quintet (filled out with bassist Urban Medic, drummer Robert Kovacic, and vocalist Zanil Tataj Zak) finally entered a studio to record this debut 10 song album, the 65 minute "Last Man Standing".

Much of Black Diamond’s sound is rich with classic, traditional influences, along with a slightly longer arrangement propensity, as 6 of the 10 tracks eclipse the 6 minute mark. You’ll get some of their cultural texture in the clean sections of "Hold Me Tonight"- a pure power ballad where Zanil stretches out some of the verses with dramatic pauses or in key note fluttering. Their name sake "Black Diamond" contains a few progressive textures, especially in the time signature juggling from Urban and Robert- while the guitar fluidity and riffing reminds me of classic Iron Maiden and self-titled album era Metallica. When the band go for a more compact arrangement like "The Edge of Sanity"- you get the feeling that the quintet dig for the balance between impressive guitar leads and this darker, mysterious texture to their chord choices- evoking feelings of Savatage meets Annihilator.

I do believe in the long run Black Diamond need to cut off some of the excessive instrumental sections to their songs- less is more in the traditional, classic metal world. Zanil will remind a lot of people of Bruce Dickinson in many parts, and overall this band really takes their influences and uses them as a springboard to create their own fresh sound. I’m going to be watching this act’s progress over the coming years.