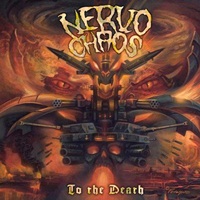 Forming in 1996, the four piece death metal quartet Nervochaos hail from Sao Paulo, Brazil and their fifth full length release "To the Death" shows no signs of slowing down their crusade for fierce riffing, guttural vocals, and punishing tempos. The 13 songs on this record feature a mixture of slightly up tempo arrangements and songs that possess a doomier overtone- a la early Obituary and Asphyx. Many will enjoy the stop/ start elements where bassist Felipe signals the next riff, especially evident in the military stomper "The Exile". Drummer Edu keeps up with the triplet nature for "Destroyer of Worlds" with this killer double bass/ semi-blasting snare groove, making this shorter 2:04 cut one of Nervochaos’ best.

Nothing earth shattering in terms of originality, but the execution will meet with approval for most who’ve been involved in death metal for more than 60 seconds. Guest lead guitar breaks take place with luminaries such as Ralph Santolla (Death, Deicide), Zhema (Vulcano), and Jao (Ratos de Porao). Guitarist Guiller handles the vocal chores, and his gruff, lower register adequately works but will not bring to mind anything unique in the movement. "Sheep Amongst Wolves" contains trailing guitar note squeals in the introduction that I would expect more so from a Pantera-like act that a South American group- which is why I prefer the heads down riffing employment for "Smoking Mortal Remains" that is unmistakably death metal to the bone.

Joe Petagno designs thought provoking cover art for the band, and in the end Nervochaos approach "To the Death" with no nonsense bells or whistles- and we all know consumers who prefer that formula.