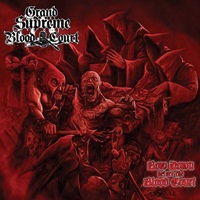 GRAND SUPREME BLOOD COURT – Bow Down Before The Blood Court

Absent for 9 years from the death metal scene, former Asphyx guitarist Eric Daniels put out the call to many of his Asphyx band mates to record an album in the tradition of obscure mid to late 80’s death metal. Recruiting Martin van Drunen on vocals, Alwin Zuur on second guitar (switching off from his bass duties in Asphyx), with bass handled by Hail Of Bullets’ Theo van Eekelen and drums from Asphyx founder Bob Bagchus- Grand Supreme Blood Court is not a mere repacking of Asphyx under a new name.

"Bow Down Before The Blood Court" has that razor sharp buzzing guitar tone, speedier drum tempos (nothing approaching blast mode, but definitely above the doom pace) and the omnipresent growls and screams that place Martin in a similar class as John Tardy of Obituary when it comes to shattering the glass of the earth. They aim at creating a sound reminiscent of Necrovore, old Slaughter (the Canadian band, not the US glam variety) and Funeral Bitch among others, and I think they’ve succeeded with killer tracks such as "Veredictum Sanguis",  the steamroller "Fed to the Boars" and the non-stop viciousness of "Piled Up for the Scavengers".

The best of the genre fore go polish for pure power oozing from the amplifiers, the strings dangling by the miniscule pressure necessary. Those who grew up in the tape trade movement when the genre first began will love Grand Supreme Blood Court. Who knows how often we’ll get new albums from this band considering the recording and touring responsibilities for most of the other members with their main groups, but if they keep churning out quality songwriting like this, the wait will be well worth your time and energy investment.

BLOODREDSKY – A Cross To Bear & Hell To Harness