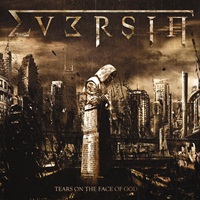 EVERSIN – Tears On The Face Of God

Epic thrash metal from Italy here with Eversin. Guests include Atomikraft/ Venom vocalist Tony Dolan as the evil voice on "Nightblaster" and DGM/ Empyrios guitarist Simone Mularoni for a solo spot on "The Tale of a Dying Soldier". The main vocals from Angelo Ferrante sound like a fever pitched Dee Snider if he was only capable of screaming (or singing) in one monotone key, while the bass notes and chords from Ignazio Nicastro receive a full and up front representation in the mix a la Overkill meets Annihilator.

Some of the guitar parts from Giangabriele Lo Pilato have that power/ thrash shuffling aspect, basking in the best cues from late 80’s to mid-90’s Megadeth, all periods Nevermore and a flash of Annihilator- some of his best work taking place on the off-time chop heavy "Nuclear Winter". Overall I wouldn’t say the tempos are thrashy, but the riffing has nuances of the genre- it’s difficult to place Eversin in a particular style because they love epic metal, power metal, and thrash all the same.

Their second album as Eversin (although fifth together as three early 2000’s albums were released under their other name Fvoco Fatvo), "Tears On the Face of God" probably will be best suited in the hands of metal fans who seek out something challenging and left of center when it comes to their tastes. Their unusual knack for phrasing certain segments of their songs along with the decision to change tempos in strange places makes them an ‘odd’ group- be it narrative talking parts in the middle of a song or the marching nature of "Under The Ocean" against a filtered voice, it’s not the norm.

Conclusions? Probably a band best grasped in a live setting, but I do love the Overkill meets Maiden bass parts enough to give this more listens.

BLOODREDSKY – A Cross To Bear & Hell To Harness