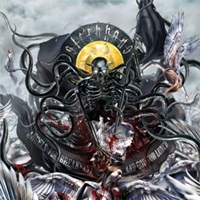 STERBHAUS – Angels For Breakfast… And God For Lunch

Death/thrash with a sense of humor- this quartet Sterbhaus combine a vicious musical outlook with humor lyrics and titles that I’ve never heard before. "Frogboiler" and "Retardival" seem to be two that made the synapses percolate on the Swedish band’s second full length album "Angels For Breakfast… And God For Lunch". The lyrics for "Insecticide" attack the ‘infestation of noise’- a cleansing of metal if you will, to squash gimmicks and return to the essence of what the genre should be about.

Musically, the guitars slice and dice with this latter day Bay Area meets Overkill philosophy- along with the known Swedish death tendencies when the tempos reach high octane overdrive. The drumming of session guy Erik Rojas isn’t simplistic in the slightest- he throws down some serious double bass, snare and tom chops on "Tell Them I Hate Them", intertwining the best in death metal speed with Dave Lombardo precision. The follow up "Retardival" has this doomy, merry go round meets circus theme taken to a metal level- with Marcus Hammarstrom’s vocals anguished and tortured, mirroring the arrangement as Scandinavian musicians seem to do easily. "Frogboiler" even has a country hoedown break in the middle that blew me away before returning to the normal death/thrash programming.

Recorded by Tommy Tagtgren at Abyss Studios- Sterbhaus combine Bay Area crunch with German and Swedish heaviness and the vocals are definitely not for the weak at heart. With plans to tour South America again in 2013, "Angels For Breakfast…And God For Lunch" should do well in all parts of the metal globe. Bravo, proof that you can be witty and not sacrifice any metal integrity in the process.