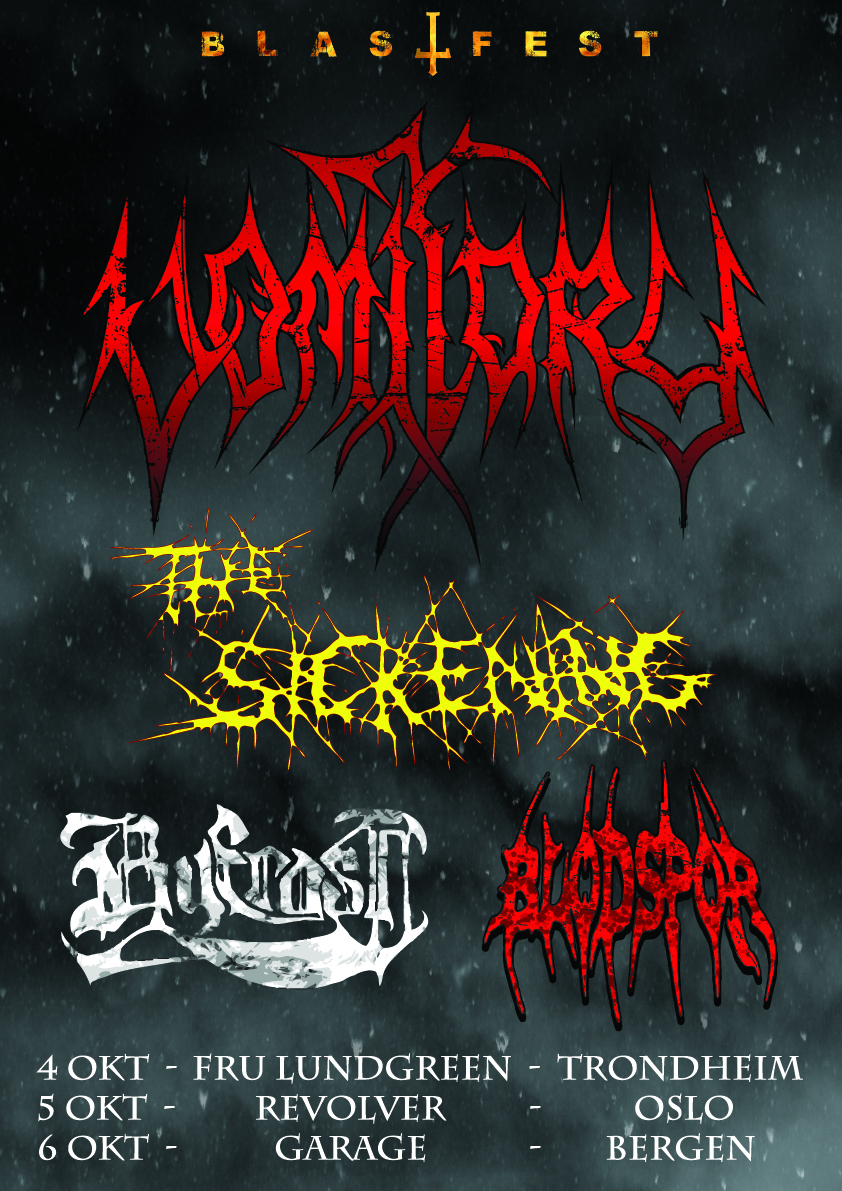 VOMITORY (Sweden)
Vomitory – who without a doubt are the Swedish underground kings of death since 1989, and who have released 8 albums on MetalBlade Records, will undertake a minitour in Norway before recording a new album! About time too and it will be insane!
http://www.vomitory.net/
http://www.facebook.com/pages/Vomitory/39211340933

THE SICKENING (Kristiansund)
The Sickening from Kristiansund is a death metal band formed in 2003. The band didn´t
start full-time before 2007 due to members other priorities such as Violated, Slagmark and
Blood Red Throne. Their first demo "Soiled Rotten" got them signed on Spanish label
Xtreem Music, with also put out their debut Death Devastation Decay in 2009. The following
3 years The Sickening toured with Vader, Gorgoroth, Blood Red Throne, Mindgrinder,
Sulphur and Blood Tsunami and did a series of international festivals.
In 2012 the band will finally hit the studio again to record their second album.
http://www.myspace.com/thesickeningdeathmetal
http://www.facebook.com/pages/The-Sickening/246063175435282

BYFROST (Bergen)
Byfrost was formed in Bergen, Norway, in 2007. They play Norwegian blackmetal as from the cold west and are one of Bergens most prommising bands. They have toured with Taake and done several festivals shows in Europe among others; Partysan, Bloodstock Open Air, Hole In The Sky and Karmøygeddon. The first album Black Earth came out in 2010, and their second album Of Death came out in 2011 on AFM Records. Darkness shall again rise in Norway. It gets cold when Byfrost comes to town.
http://soundcloud.com/byfrost
http://www.facebook.com/BYFROST

BLODSPOR (Oslo)
Blodspor formed in Oslo, 2006. They´ve grown on stage as well as in rep. for being an
energetic band crossing the genres of grindcore, hardcore death, black and punk. This fusion
of genres makes them unpredictably playful and unique. They give all and are renowned for
their technically precise time signatures and their live enthusiasm. The debut album came out in
2010 and they are currently recording a split LP with Helldealer and their second album.
You might have seen Blodspor at the Inferno Festival, Bylarm, supporting Napalm Death or
when they won Deatchmatch in 2009. If you wonder what comes next from Oslo, this is it!
http://www.blodspor.com/
http://www.facebook.com/pages/Blodspor/12162156577